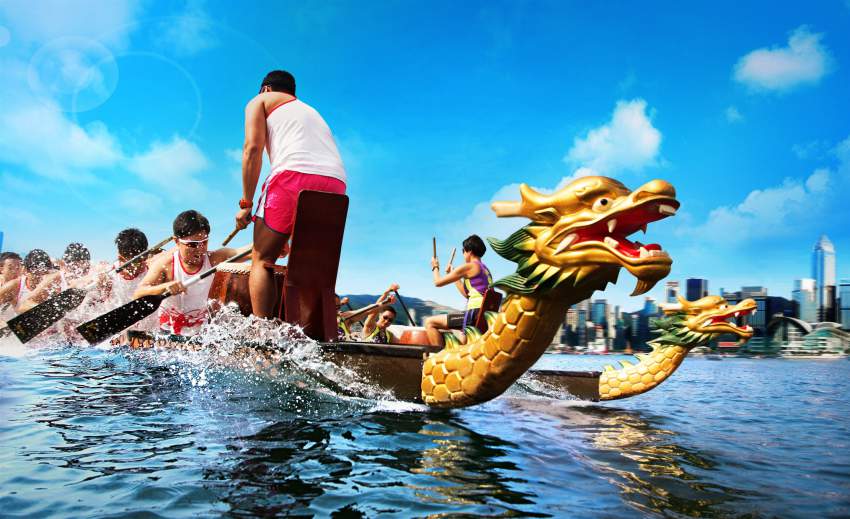 Dragon Boat Festival or ‘Duanwu Jie’ in Mandarin Chinese (Tuen Ng in Cantonese) has a rich history in China and its origins have long been debated. The most popular and accepted tale is that it was derived to celebrate the life of the great patriotic poet Qu Yuan, who was loyal to the state of Chu during the Warring States Period. Dragon Boat Festival is celebrated on the fifth day of the fifth lunar month (Tuesday 30th May this year). People in China have three days of holiday to commemorate the festival and many of them will choose to celebrate with friends and family, enjoying traditions such as dragon boat racing and eating ‘zongzi’. Find out more:

Who Was Qu Yuan?

Qu Yuan was a poet who served the court of Emperor Huai during the Warring States Period (475 – 221 BC). Famed for masterpieces such as Li Sai (The Lament) and Jiu Zhuang (Nine Chapters), he is still regarded today as one of the greatest poets in Chinese history. Legend states that after learning that the Chu State had been defeated by the Qin, his own warnings of the impending danger having fallen on deaf ears, he chose to drown himself in the river.

His death brought so much despair that locals quickly rushed to the river in search of his body. Unable to retrieve it, people threw zongzi (see below), eggs and other food items into the river to feed the fish so they wouldn’t consume his body. He passed away on the fifth day of the fifth lunar month, which is the day Dragon Boat Festival is celebrated today. And so began the legend of this popular festival…

Zongzi is the most popular food associated with the festival. Wrapped in bamboo leaf, the special dumplings are filled with all sorts of sweet and savoury treats. Popular flavours include dates and egg yolks. However, particularly in recent years, more exotic flavours have sprung up such as pork belly and soybean. The most common shaped zongzi are like little pyramids, but they can be found in a variety of shapes and sizes. Most commonly eaten in the south of China, where people prefer salty flavours, zongzi can still be found for sale throughout the country in the lead up to the festival.

Check out this video of our very own Mao showing you how to make Zongzi in time for this year’s Dragon Boat Festival:

What is Dragon Boat Racing?

The story of the origin of dragon boat racing varies from region to region in China, however all involve traditional Chinese virtues such as loyalty, love and honour. Aside from the legend of Qu Yuan, another popular tale is that of a young girl who died trying to rescue her father’s body in Zhejiang, named Cao E.

After her father drowned, Cao E trekked relentlessly up and down the river bank in search of his body, day and night for many days. Legend states that on the fifth day of the fifth lunar month, she also jumped into the river and her body was discovered five days later in her father’s arms.

Dragon boat races are now celebrated throughout China, as well as internationally. It has even become extremely popular in the UK, with annual races held throughout the country. Believe it or not, there’s even a British Dragon Boat Racing Association!

Fun fact: Dragon boats are so called because they represent the shape of a traditional Chinese dragon and have the head of a dragon at the stern. Teams can be anywhere between 10 and 50 rowers. Popular folklore suggests that the winning team of the dragon boat race brings a more successful harvest to the village.

Dragon Boat Festival is also associated with the dispelling of diseases and viruses using herbs, so you will often see children walking around with coloured silks tied around their wrists and ankles filled with sweet-smelling perfumes. It is thought that these will protect them from illness.

What are you doing for Dragon Boat Festival this year? Be sure to let us know on our social media channels and take some pictures of any feasts or dragon boat races you attend!