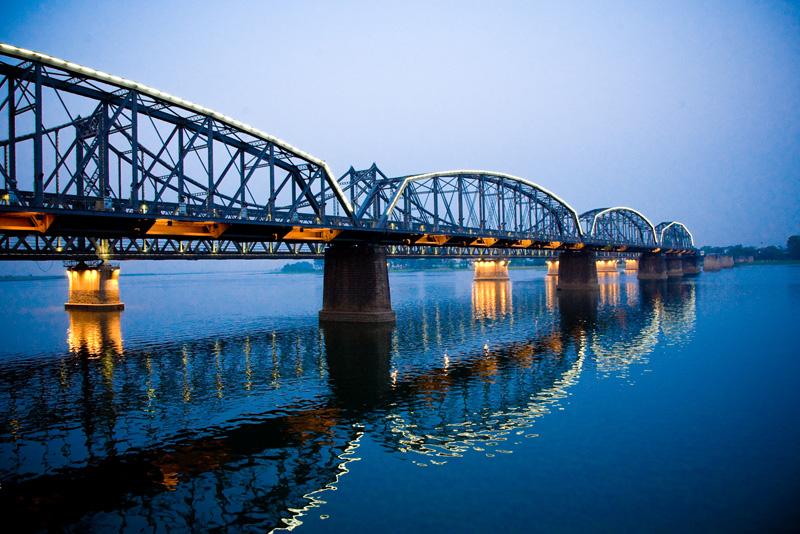 China’s North East is a region enshrouded in relative obscurity and is seemingly unremarkable. Beyond the bitter cold reaches and ice sculptures of Harbin, it is unlikely to prove a bucket list destination for most. Yet, within the historical lands of Manchuria lies a city which is being increasingly placed under the spotlight of the international media; an unlikely candidate given its somewhat mediocre appearance. This city, ironically, is obtaining this newly found fame not through being a part of China, but for the country which it directly borders onto. Thus, we introduce Dandong (丹东), best known for… North Korea. But is that all we can make it out to be?

Owing to my work in the North Korean travel industry I have visited Dandong four times, my case of proving it is worthwhile may be instantly quashed by the fact I have only ever been there as a means to an end to reaching its terrifying neighbour, an overnight train journey from Beijing. If otherwise, I doubt for all my love of China that I would have even heard of the city let alone consider it as an end in itself. Such is this city; its very purpose and rise is inseparably rooted in the fact that it serves as a mediator between North Korea and the rest of the world.

Historically called “Andong“ (安东), the settlement emerged for just that purpose, the name signifying the “pacifying of the East”, with Imperial China striving to uphold stability and order with what was the Joseon dynasty of all Korea. Come the modern world, the name was left in pieces after the Japanese crossed the river and occupied the wider region. Then later, in the Korean War, the city became a starting point for hundreds of thousands of Chinese troops who crossed the Yalu River to fight the United States and its allies. Given the new historical legacy which emerged over the city, its name was later changed to Dandong, meaning “the red east”.

Yet for this history, despite these defining links to the Korean Peninsula, it could be said the city and its surrounding areas have assumed a character and spirit of their own which have an integral role in Chinese history. The urban area itself is somewhat unimpressive and not a pull on its own, characteristic of a typical lower ranking Chinese city with a shabby appearance, lacking the glamorous scenes witnessed in the larger metropolis’s such as Beijing, Shanghai and Guangzhou. Thus, the historical cliques shine brighter than the area itself, which has little going for it in terms of shops, facilities and restaurants.

The first thing of note is that of the Hushan (虎山) great wall, located about 13km North East of the city. The Hushan Wall is the most eastward segment of the Great Wall, as well as probably the least famous. Constructed as a watch post against the Joseon Dynasty, it directly faces North Korea where the gap between the two countries is reduced that of a mere stream. It bares sharp contrast to the famous Great Wall segments north of Beijing, lacking the overwhelming tourist crowds of the latter. It’s a short, but fairly good hike.

Back in the city, one may visit the Chinese official Korean War Museum, known in China as the “War to Resist U.S Aggression in Korea”. The Museum, although currently undergoing renovations, tells the Chinese narrative of the Korean War in spectacular detail. In addition to this, there is also the famous “Broken Bridge”, once linking the two countries, half of it being destroyed by a U.S bomber in 1950. There’s also the opportunity to take a boat ride along the river itself, offering the closest view to the world’s most secretive country without actually stepping foot in it, an eye-opening comparison.

But, besides those things, there isn’t much else to see or do really; the above can be all done within the space of a day. Whilst it has its little perks and significances here and there, Dandong ultimately remains anchored as a frontier city in connection to China’s controversial neighbour. I have grown to appreciate Dandong for the place it is, but if one was not going to North Korea, then above all I don’t think I’d be able to make the case for anyone to see it as an end in itself. For those who visit it is not the star of the show, it’s merely a build up to a much more thrill seeking journey which is a different story altogether.

Why not read another of Tom’s China travel blogs, The Hidden Gems of Chinese Travel: Zhouzhuang? Check back to TCB soon for more travel stories like this!