We’ve published some pretty crazy stories about pets in China in the past year, from thumb sized monkeys to genetically engineered mini pigs and extortionate luxury dog funerals. One thing’s for sure, the pet market in China has boomed in recent years and it shows no signs of slowing down. Just take a walk down any street in Shanghai or Beijing and you are likely to see dogs dressed in outrageous outfits, carried by city dwellers fashioned in equally questionable attire.

Studies have shown the genetic diversity amongst dogs to be highest in Asia, which likely indicates that domestication happened there first, although it is impossible to say with certainty. Dogs have been found in many of China’s most ancient archaeological sites. As well being kept and trained for hunting, dogs were also seen as a source of food and commonly used in sacrificial rituals.

One breed of dog that has a rich history in China is the pug. Pugs can be traced back to the time of Confucius, where they were only permitted to be kept by members of the Chinese imperial household. Pugs were revered to the extent that they were given the same rank as the emperor’s wife, with death sentences meted out to anybody who thought of stealing one!

More recently, dogs were also kept in rural areas as companions and farmhands, performing tasks such as shepherding. Though these dogs often had names, they can’t be considered ‘pets’ in the Western sense, as should their usefulness on the farm be outweighed by their worth as food, they would be eaten. Dogs are still eaten throughout China (sorry pooch lovers), however a rising middle class and attitudes towards animal intelligence have seen the practice diminish somewhat in recent years.

Nowadays, dogs are kept increasingly as pets, particularly by wealthy city dwellers, however strict regulation and policies such as the 一犬一户 (Yī quǎn yī hù – One Dog, One Household), which restricts residents in Beijing to one dog per family, mean that the practice is restricted somewhat, particularly in larger cities. There are also various laws throughout China which restrict the ownership of large dogs as they have traditionally been thought of as more dangerous. Late in 2014, China introduced a law to protect animal welfare, and shifting attitudes are likely to give rise in coming years to more relaxed laws on pet ownership.

A friend recently told me that many elderly people in China who don’t have grandchildren often raise dogs instead. It wasn’t until I spotted the following sight on a recent trip to Shanghai that I believed him. It’s a brave woman who can pull off UGG boots and a leopard print stroller, but I think she nailed it: 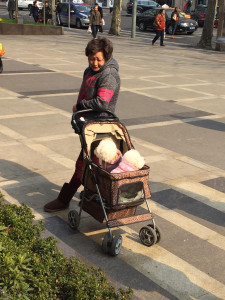 Cats and dogs account for 80% of total pets in China, with the number of people keeping tortoises also skyrocketing in recent years. Up until recently, it was thought that domesticated cats had been transported to Asia from Egypt and the Mediterranean, however research in 2015 revealed that the first cats to live with humans 5,000 years ago in Asia were relatives of the Asian leopard cat, pictured below.  In more recent years, cats have been kept as companions, particularly by over-45s after their children leave home. In many cases, the keeping of animals such as cats and dogs can be seen as a symbol of financial success – the ability to feed another hungry mouth and an extension of the owner’s fashion. Ahead of this year’s Tomb Sweeping Festival on 4th April, many people in China also paid respects at the graves of their deceased pets. Owners left poignant messages at the gravesides at Baifu Pet Cemetery in Beijing, along with flowers, food and photographs. A sign as clear as any that attitudes towards pets in China are changing, the cemetery charges up to 20,000 yuan (£2100) for a plot and is in high demand amongst the city’s wealthy.

One practice we’re not so keen on is owners in China dying dogs to look like other animals – check out the ‘panda’ in the featured image! That’s one trend we might just have to put a lead on…