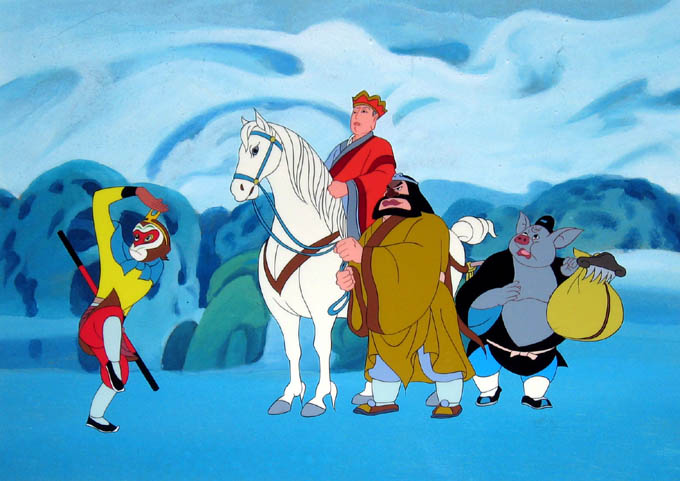 Watching Chinese cartoons is a fun way to improve your Chinese.  They are short, interesting and easy to follow. Here is a list of  new and old Chinese cartoons to help you practice your listening or vocabulary.

Journey to the West 西游记

Journey to the West is a famous Chinese cartoon and folktale. The series follows the mischievous “Monkey King” who after centuries of imprisonment ventures out into the world,  towards the west, with his band of friends.

Lotus Lantern is a film that follows the adventures of Chenxiang; the son of a goddess and a mortal man. The story revolves around him attempting to defeat his evil uncle and free his mother – all with the help of a Magic Lotus Lantern.

Chinese Wuzang is set in 7th century Henan, China. It follows  three tenagers; Tang Xiaolong, Cheng Xiaohu and Hua Xiaolan. The series follows them as they master the Shaolin Martial Arts. Their goal is to defeat to an all-powerful demon.

Flavours of Youth is one film made up of three separate films. The films are set in three different Chinese cities: Beijing, Guangzhou, and Shanghai. Each storyline follows different people as they try and overcome and resolve issues in their lives.

Cocoa Heart family is an animated family drama. The series represents the day to day life of a modern Chinese family. Through comedy, we follow the family through their everyday lives at school, home and work.

The Legend of Luoxiaohei is a cartoon series about Luo Xiaohei; a spirit trapped in a cats body.  A young girl named Luo Xiaobai adopts him. From then on,  the series follows their life together as they battle the mysterious Diting and his wolves.

Fei Ren Zai is a short series about what would happen if Chinese gods came to live in the real world. The 5-minute episodes follow the everyday adventures of these gods as they try and live out ordinary lives amongst us.

You can also check out “Bao” – the  Oscar winning Chinese animation!