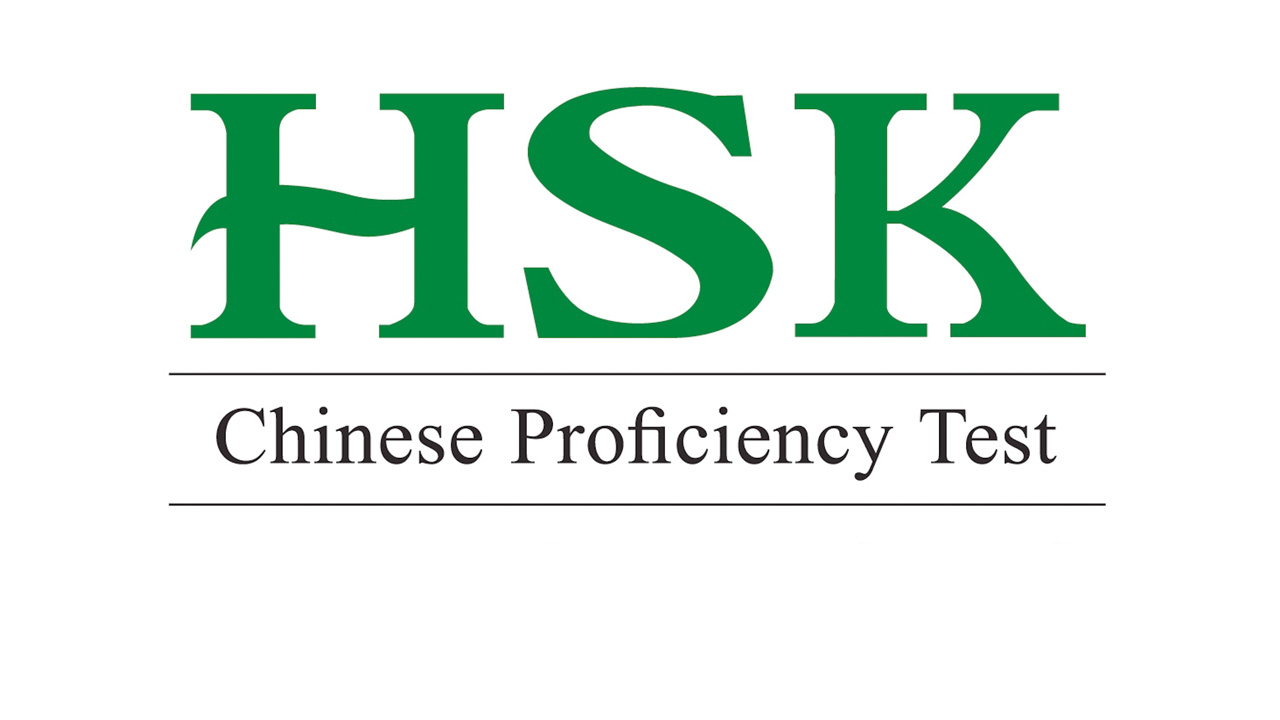 The Hanyu Shuiping Kaoshi (HSK) has become the most widely accepted testing system for Chinese language education within mainland China and indeed around the world. In China, HSK certificates are required for everything from study-abroad programs at schools and universities to employment opportunities with Chinese companies. Many Chinese learning platforms and apps (such as The Chairman’s Bao) use HSK levels to grade their materials. But in other parts of the world, teachers and learners are often more familiar with other language proficiency ranking systems. Therefore, Chinese teachers and learners will often encounter the need to map out or “translate” the Chinese HSK language proficiency testing system into other evaluation systems which are used more commonly in other parts of the world such as ACTFL guidelines (prevalent in the USA) or CEFR levels (utilized in Europe as well as other regions).

Having standardized, certifiable evaluations of language proficiency is not only beneficial for language teachers and learners, it is also extremely useful for many other members of society. For example, employers hiring a new employee might require a certain level of foreign language proficiency from their new staff member. Universities admitting foreign students need to ensure that their students will be able to manage their courses. In not-too-distant past, a multitude of systems were used to test and certify language proficiency levels. The problem was that many of these assessment systems were language-specific and not transparent to the general public. Although language education “insiders” knew perfectly well what test results of various systems signified, the general public had no way of knowing what seemingly arbitrary labels such as “low-intermediate” or “proficient” implied.

What are the ACTFL and CEFR language proficiency assessment systems?

It became apparent that more universal and transparent language assessment standards were essential and this led to the creation of two such systems: the American Council on the Teaching of Foreign Languages (ACTFL) language proficiency guidelines, which focus on assessment and testing of all foreign languages taught in the USA, and the Common European Reference Framework (CEFR) levels created by the Council of Europe, which utilize six proficiency categories (A1-C2) for all the languages used in Europe. Both of these systems employ a skills-based approach to language assessment which is independent of the language being tested.

How are the ACTFL guidelines structured?

The ACTFL system divides proficiency evaluation into eleven nuanced levels and also tests the skills of speaking, writing, reading and listening in separate exams. The levels range from Novice to Distinguished:

The most distinctive feature of ACTFL testing is that each of the four major foreign language skills – speaking, writing, listening and speaking – are tested separately in individual exams. Thus, it is possible to be certified by ACTFL in speaking, but not in writing, etc. In addition, ACTFL certification is linked to participating in an ACTFL exam.

The A1-C2 system of CEFR

The CEFR proficiency levels are divided into six categories of skills: 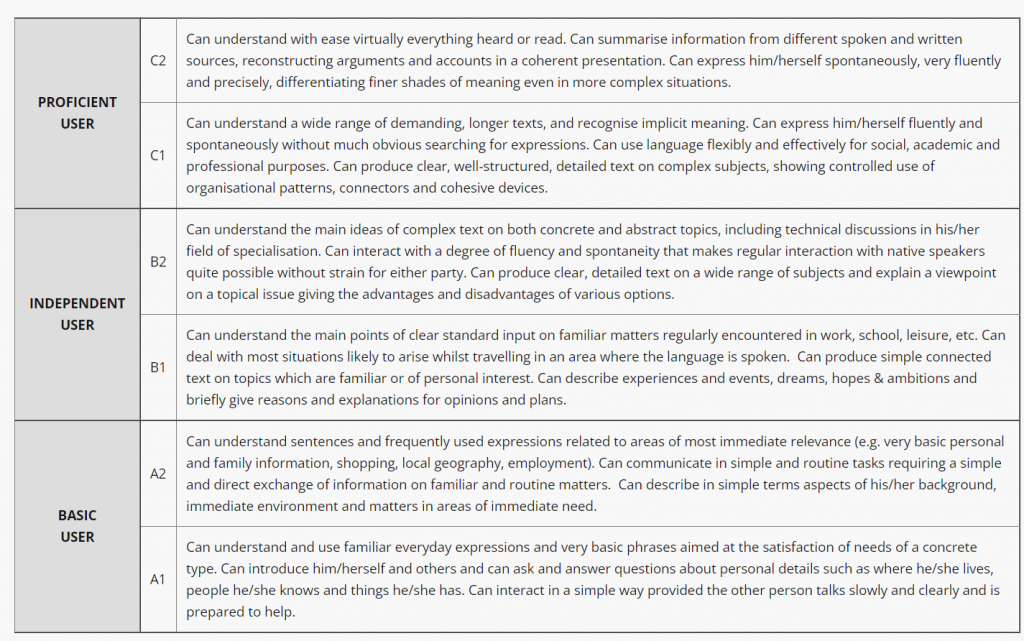 What are HSK levels?

HSK stands for the 汉语水平考试 Hànyǔ shuǐpíng kǎoshì. This is the standard proficiency exam of Mainland China for non-native speakers of Chinese. The test is administered by Hanban, an agency of the Ministry of Education in the People’s Republic of China. The first iteration of this assessment system was rolled out in the early 1990s and a massive revision was launched between 2010 and 2012. The test is currently undergoing a third revision which will include the addition of three higher proficiency levels for a total of nine levels.

There are currently six HSK levels and testing for the new Levels 7-9 is projected to begin in the spring of 2023. The six levels are tested by six separate exams which include reading, writing and listening, with speaking tested in an optional, independent exam. There are also specialized exams, for example for medical and business Chinese.

What are the differences between HSK and other benchmarking systems?

The biggest difference between HSK and ACTFL or CEFR is that HSK is predominantly vocabulary based. The number of vocabulary words learned (as well as the number of characters learned) form the strongest basis for assessment of each level. Yes, skills such as listening, correct sentence structures and reading in context are also tested, but most descriptions of HSK levels as well as preparatory materials for the exams chiefly focus on the vocabulary lists for each level. Interestingly, speaking is not even tested in the main exam. (A speaking exam is only offered as an optional modality.) Thus, one of the major skills that many Chinese learners struggle with – pronunciation and especially tones – is not even tested as part of the main exam.

One significant feature of these HSK vocabulary benchmarks is that the required number of vocabulary words (and the number of characters) roughly doubles for each of the next levels on the list. Thus, 150 vocabulary words are required for HSK 1, 300 for HSK 2, 600 for HSK 3, etc. For this reason, there are far more nuances between the early HSK levels than there are in the later levels. This will affect the mapping structure: Lower HSK Levels comprise fewer skills and abilities while the higher HSK Levels correspond to a greater breadth with respect to CEFR and ACTFL levels.

How to map ACTFL and CEFR levels to HSK benchmarks

While the topic of mapping CEFR levels into HSK equivalents is relatively well-researched, there appears to be only sparse research comparing ACTFL benchmarks to HSK levels. On the other hand, there are many well established comparisons between ACTFL and CEFR proficiency benchmarks. Therefore, using the CEFR system as a bridge between the two other systems, it should be possible to compare ACTFL first to CEFR, compare CEFR to HSK and finally to extend the comparison to the third modality and map out HSK on the ACTFL scale.

4. Comparison of ACTFL and CEFR Levels

(Notes on comparing ACTFL and CEFR: While there is no perfect correlation between the levels of each system, there is general agreement that the ACTFL and CEFR may be roughly mapped to each other. The beginning ACTFL levels (Novice Low and Novice Mid) correlate to pre-A1 abilities and the highest ACTFL ranking of Distinguished roughly correlates to C2. There is a slight discrepancy in ACTFL/CEFR correlations between the productive skills of writing and speaking and the receptive skills of reading and listening).

When the second version of the HSK testing levels was first launched in 2010, it was claimed by Hanban that the six HSK levels corresponded with the six levels of CEFR (A1-B2). In practice, however, it was determined by several European Chinese teaching associations that the highest level of HSK 6 did not nearly correspond with the near-native speaker levels associated with C2. For example, the Association of Chinese Teachers in German-Speaking Countries determined that HSK 6 was associated with language competencies no higher than B2. In my own experience both as a foreign language teacher (of English, in Germany) as well as a student of Chinese (about HSK 5 Level), I would evaluate the highest HSK Level 6 to be equivalent to about the beginning of the C1 level.

The widening breadths of language proficiency levels reflect an inverted pyramid, which is well exemplified by the ACTFL illustration provided above. Progress occurs much faster in the beginning levels because it’s much easier to double your knowledge at the novice levels. If you learn 20 vocabulary words the first week and then 20 more the next week, then you’ve just doubled your knowledge! But this phenomenon becomes much more time-consuming to recreate at higher levels because the knowledge base has become much wider. Achieving the jump from the upper-intermediate or advanced levels into the truly proficient levels might take years of study or involve a long-term stay in a country where the language is spoken. Basically, the highest levels of ACTFL (Distinguished) or CEFR (C2) comprise language levels which many native speakers might not even achieve. Passing a Distinguished or C2 exam requires the kind of literacy that is normally only achieved by native speakers who have received at least some university-level education. For this reason, the projected expansion of HSK proficiency testing to incorporate three more levels at the top is a welcome development. However, as of yet (November 2022) these new HSK levels 7-9 have yet to be implemented so we will have to wait and see how these new benchmarks pan out.

The following chart is based on a review of literature from several sources, particularly from statements made by associations of Chinese teachers in Europe, for example in Germany which assessed HSK levels as compared to CEFR. The chart is also based on my own experience both as an EFL teacher working with CEFR levels for many years and as a learner of Chinese studying roughly at a mid B2 (HSK 5) level. Please note that assessment of the new HSK Levels 7-9 which I have included in the chart are only conjectures since testing for these levels has yet to be implemented.

The following chart is based on established comparisons between CEFR and ACTFL levels. Using the above chart (HSK-CEFR), I then compared ACTFL to HSK. Again, the new HSK Levels 7-9 can only be tentatively assessed.

Hopefully, this comparative analysis between HSK, CEFR and ACTFL benchmarks will be able to assist teachers and students to map out a given student’s proficiency level as described by CEFR or ACTFL into the equivalent HSK levels. This will be helpful when selecting materials for courses which are often rated according to HSK or when deciding which HSK exam level will be appropriate, should a student be required to submit an HSK certificate.