Home » Blogs » Chinese Culture » The History of Gourds in China 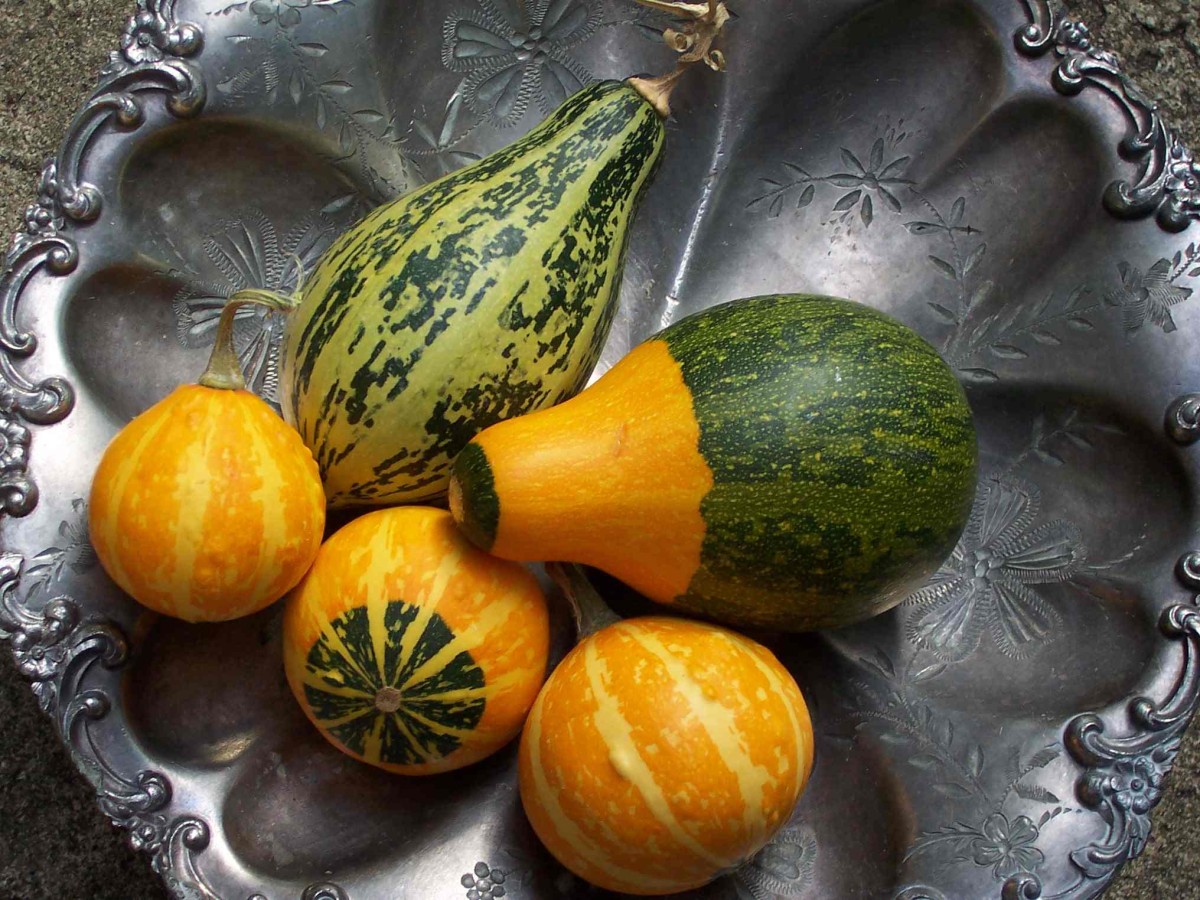 The History of Gourds in China

Gourds, so common and insignificant in western countries, have a much deeper meaning in Chinese culture. Drying and painting them to us seems fun, but for Chinese people is an art and fengshui.

Looking back, they were actually introduced to us from Asia, but only the practical aspect was “imported”, leaving aside the magic. Written below is their forgotten meaning:

In terms of history, gourds 葫芦 (hú lu) were dried and used for keeping or transporting water, wine, medicines and magic potions. However, as with many other objects and symbols in Chinese beliefs, they also had a homophonic relationship with another “hu”: 护 (hù), signifying protection and blessing (祜 hù). Thus, gourds in China were used as charms for scaring away malefic spirits and diseases. 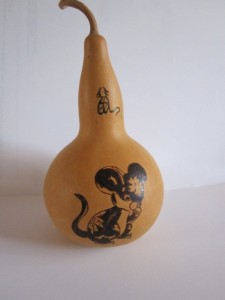 In Asia, in general, there is a specific technique of tying gourds with a rope from when they are very small, so that they grow into the figure 8, a lucky number in China.

For kids, they were considered to have magical powers that fight against chickenpox. In the last night of the year, parents would hang a dry gourd near children who had not yet contracted chickenpox. When the chickenpox and measles spirits came to visit the kids, the diseases would then travel inside the gourd, keeping the kids free from disease. If the kids still got sick, it was believed that the disease was still there, but not as severe as it could have been had no gourds been hung.

In contrast, elderly people often carried gourds on their backs, as they were associated with old age and longevity.

Hence, in fengshui, it is recommended to keep one near the bed for faster recovery after an illness, or to carry it in your bag for protection against bad spirits. 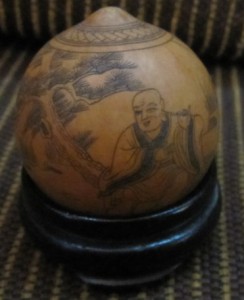 Other gourds in China have paintings depicting scenery and old legends or, as above, zodiac signs.

The fact that gourds are growing and reproducing at a fast pace is an additional reason for them to be considered auspicious, signifying prosperity.  In some areas, the tradition says that for 中秋节 (Mid-Autumn Festival), gourds should be stolen from the field and kept at home, in the hope of bearing more children.

In Daoism, the shape of the gourd represents the sky and the earth, the infinite, the universe, a magical world, a parallel universe, or an entry into another world, where immortals or persons practicing Daoism can travel to – signifying self-content and sufficiency. There are old Chinese stories describing people accidentally taking small and narrow paths to enter a magical world, where people enjoy peace and long life. In some Chinese parks and gardens, gourd shaped gates are common, along with other shapes with various symbols.

Out of the eight Taoist immortals (八仙 – bāxiān), the gourd personalises Tie Guai Li (铁拐李 – tiě guǎi lǐ), also known as “Li with the iron crutch”. The story says that one day, Li left his body to visit Laozi 老子 on the sacred mountain Hua Shan (花山- huāshān). Before leaving, he asked one of his disciples to watch his body in his absence, and if he would not return in seven days, the disciple should burn his body. On the 6th day, the disciple found out that his mother was very sick and, as a good son, he returned home immediately, but not before burning Li’s body. When Li returned and found his ashes, he had no choice but to enter the first body he found, of a beggar who had just died. So, he transformed the beggar’s bamboo crutch into one of magic iron that could transform things. He then obtained the potion for immortality inside the gourd he had with him and used it to revive the disciple’s mother. When he wanted to sleep, he made himself extremely small and entered the gourd.

The two parts of the gourd also symbolise the immortality potion, obtained by refining the red cinnabar from the upper part into mercury from the lower part.

More meaning is to be found in fengshui, as the origins of the “dragons’ veins” (the path followed by the energy crossing the mountains), are described as having the shape of a gourd. Due to its shape, it also symbolises the beginning, creation and uterus.

The gourd can also be found in the famous “Journey to the West” (Xī yóu jì – 西游记), when the Monkey King (Sun Wukong 孙悟空) finds out that the demons are to come after him to catch him inside the gourd they are carrying. Witty as he is, he changes his appearance into a mortal and goes to speak to them. The demons do not realise anything, but instead show him the magic gourd where 10,000 people are said to be trapped inside. The Monkey shows them another gourd; this time without any special powers, but tells them that it is magic and could devour the entire universe. The demons are curious and, being greedy, they wish to have this gourd as well, which seems to have greater powers. The Monkey, using her high connections in the sky, obtains the approval of the spirits to block the light from the sun, moon and stars, for one hour. Seeing how they disappear, the demons believed that he really has a very powerful tool, and without thinking too much, they make the exchange, giving their magic gourd to the Monkey. 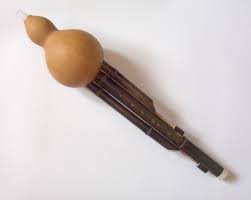 Hulusheng is made of a dry gourd, in which bamboo flutes are introduced, usually five, with both ends left open, giving it a distinctive feature when compared to other musical instruments. Nowadays, bamboo is often replaced by metal. Traditionally, hulushengs were used for sending secret messages between lovers.

If these stories have convinced you to dry gourds yourself, you must know that they should be cropped when they are ripe – their peduncle dries out and turns a brown colour – and it must be before the first frost, otherwise they can turn bad. The drying of the gourds takes a long time, particularly larger varieties, however, before starting this process, it is recommended to wash them with water and soap.

Place the gourds, keeping a distance between each of them, away from direct sun light, in a well-ventilated area. The outside of the gourd dries within one week, but the inside takes longer. Therefore, placing them in a dark room is recommended. It is very important to turn them once every two weeks, so that they dry properly. When completely dried, they are light, have a wooden texture, and seeds can be heard inside. They can then be used as decorative objects – perfect for the autumn season! 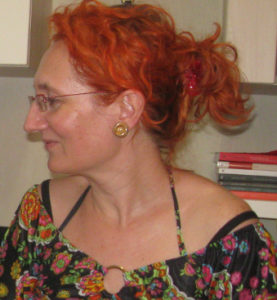 Ivona Sime is a sinologue, with a Ph.D. in engineering, as well as experience in training, management, translation and tour guiding. She spent 5 years in China, out of which she spent 2 years as a student in Beijing and 3 years as a mathematics tutor, also giving English classes to Chinese teachers and writing her Ph.D. thesis techniques in two of the most famous higher educational institutions in China. She conducted various governmental delegations from China and wrote two books on Chinese culture, business and cuisine.

For contacting her, you can access her profile on LinkedIn.