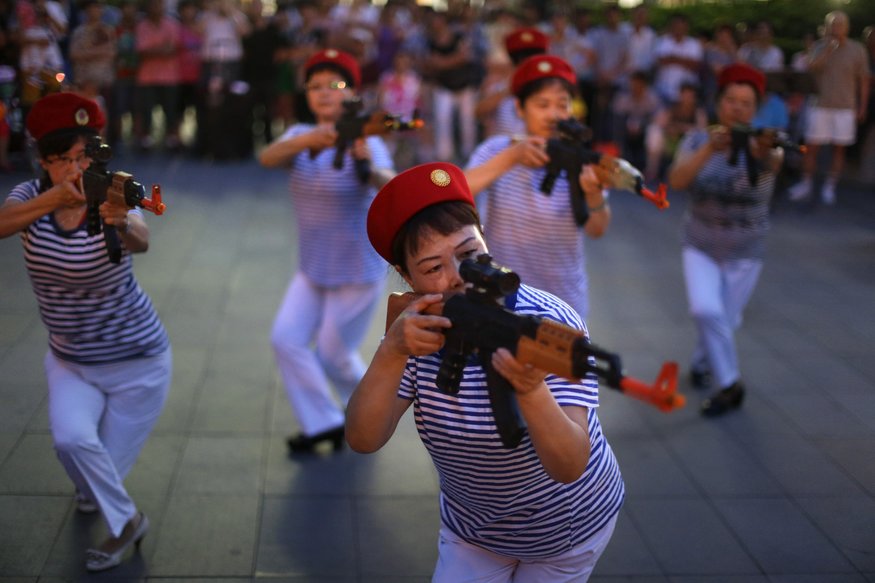 Dancing grannies, public square dancers, the hectic minefield blocking the way between the subway exit and your apartment block after a long day at the office… call them what you will, Chinese dancing aunties have come under increasing pressure in recent years. Not content to simply work off their bingo wings in peace, the dancing brigade have decided to take their hobby (and world record) abroad, defiant in the face of unrest. After all, what could be so bad about a group of grannies socialising and dancing in a public place? Perhaps more than you think…

Angry local residents, government sanctions, rival groups and infighting, a description that sounds more reminiscent of gangland New York than groups of over 45s dancing to popular music. Scratch below the surface, however, and there is perhaps something a little more sinister to the gentle, free-flowing movements of Chinese dancing aunties.

Where did it all start?

Many of the dancing aunties/grannies grew up in an era of revolutionary song and dance during the Cultural Revolution in the late 1960s and early ‘70s. Music was loud (the louder the better) and passions ran high. Urban intellectuals were sent to the countryside to live and it was there that they encountered the yangge (秧歌) traditional folk dance, which is particularly popular in rural northern China. Times were hard and people often turned to dance as a way to keep spirits up, particularly during food shortages.

The end of the Cultural Revolution saw many people return to cities and urban married life, eventually using communal dance as a way to combat stress, keep fit and socialise. Many dancing aunties are reminiscent of their past and see the hobby as nothing more than a peaceful and healthy pastime.

In 2013, a man in Beijing was angered by the loud music of a group of dancing aunties and decided to approach the crowd. After talks failed, the man set his three Tibetan mastiffs on the group before firing shots into the air with his hunting rifle (no chill). Fortunately, nobody was injured in the confrontation. In Wuhan, the capital city of Hubei province, a resident lined the floor of the square with broken glass to stop dancers from congregating there.

Another instance of a breakdown in dancing diplomacy saw disgruntled Wuhan residents (common theme?) throw coins, rocks and ultimately faeces at a group of dancers after repeated attempts to make them stop failed. All to no avail, however, as the dancers simply turned out in greater numbers to play louder music in an act of defiance. That’s one way to kick up a stink…

Don’t think this provocation is solely one-sided though, here’s a group of dancing aunties moving a car out of the way after it parked on their patch:

In China, few things escape the watchful eye of the state and square dancing is no exception. After numerous complaints from local residents, unhappy about the noise pollution of early morning and late night hoedowns, in 2015 the government stepped in to impose new sanctions. Hiring an ‘expert panel’, the party set about standardising routines. With 12 state-approved square dances and an army of trained instructors, the government also promised to build more purpose-built cultural and sporting venues with dedicated space for the dancers.

Opposition to the sanctions complained that people should be free to dance however they choose and that there are a lack of other substantial social activities for older women in China. No matter how powerful you are it’s going to be difficult to take on a 150 million strong army of dancing grannies, don’t you think?

Dancers organise themselves into rank and file, with the most experienced and proficient dancers positioned front and centre. All dancers face forward, so that the less proficient dancers can learn from those in front. Right at the back are the newcomers who will the copy moves of their ‘seniors’, who are already well versed in the routines.

Break-away groups are sometimes formed when one experienced dancer feels that she would be better leading a group of her own, or becomes dissatisfied with the current leader’s interpretation of songs. In this case, break-away groups can end up in competition with the parent group and rivalries can develop over available space and noise pollution.

Such dancing rivalries have at times turned violent, with one incident in which a dancing group in Qingyuan was ordered to pay the medical costs of another after they clashed over shared space at a local park. I can just imagine the scene…

Or, as William Congreve might have put it: ‘Heaven has no rage like love to hatred turned, nor hell a fury like a group of Chinese dancing aunties scorned’.

There was also discord in 2014 after a dancing group in Beijing attracted international attention by performing Cultural Revolution-era songs such as ‘Without the Communist Party, There Would Be No New China’ outside a busy shopping mall each night. They wore military uniforms and carried toy guns as props (featured image) – doesn’t sound like my kind of light evening exercise!

The viral hit video for ‘Little Apple’ (小苹果) by Chopstick Brothers featured square dancing aunties, who responded by incorporating the song into many of their meetings. The dancing aunties then broke the World Record for public dancing when 18,472 of them gathered and performed the routine for the same song. In 2014, a group also went viral when they broke out in dance on a train from Lankao to Zhengzhou, as they danced joyfully to Happy Hardcore.

The dancers are also beginning to make somewhat of a name for themselves overseas, where spontaneous performances have been met by a mixed reaction. A dance on Moscow’s Red Square was stopped by police, whilst two mainland dancing grannies in Taiwan angered hotel management after their routine drew complaints from other residents. Another group of dancers in Brooklyn, New York, made headlines back in 2014 when its leader was arrested for violating a limit on noise pollution. The charge was later dropped, but the incident was widely discussed in the media and on social media.

All in all, the dancing aunties haven’t made the best name for themselves overseas so far… perhaps we’ll see more from them in 2016 as the Chinese dancing alternative to the ‘Occupy Movement’ descends on public squares worldwide…

From what I have witnessed in China, square dancing is a great way for elder residents to socialise and engage in light exercise. As we know, China places high importance on protecting elderly residents and their health – I think of the number of outside exercise parks as a good example. I would say that the best option is to give the dancers a dedicated space in which to practice and combine this with greater variety of social activities.

One thing’s for sure… if I’m still dancing at 70, I’m not going to let anybody or anything stand in my way either!