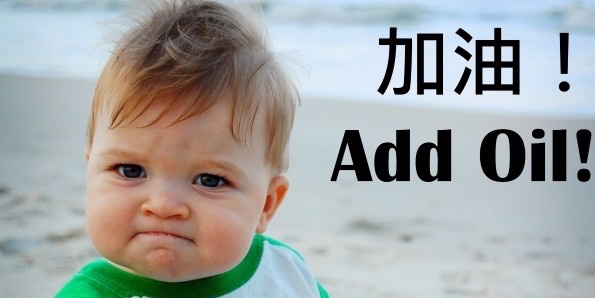 Add Oil! “Jia You” Makes it Into the Oxford English Dictionary

“Add Oil” is the literal English translation of the Chinese phrase 加油 Jiāyóu (Cantonese “Ga Yau”), which is used to express encouragement, excitement, or support to others. It’s used in sporting events, to spur on a friend, and in many other conversations!

Some people believe that the phrase was coined at the Macau Grand Prix during the 1960s, where the crowd would shout at the pit teams to “Add Oil!” (fuel) to the racing cars. The meaning of the Chinese characters is to add (加, jiā) oil (油, yóu), which implies adding oil/fuel to an engine to fire it up.

In places such as Hong Kong, where a mixture of Chinese and English is commonly used amongst friends, the English phrase often replaces the Chinese characters, and this is the reason the phrase has been added to the dictionary.

The latest addition to Oxford English Dictionary is by no means a stand-alone. Other Chinese phrases that have infiltrated everyday English include “long time no see” and “no can do”.?

Sending a big “Add Oil” to all of you in your language-learning studies!

Why not try these 4 popular Chinese tv shows to study Mandarin?