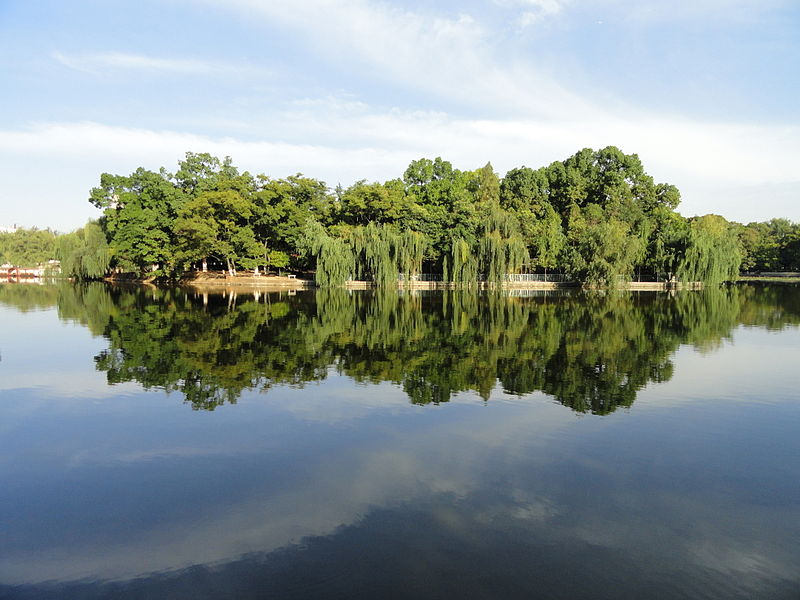 At first glance, Kunming may seem like just another drab provincial capital, but spend a little time exploring and subtle clues will quickly dissuade yourself of that notion. Bright colors, flowers, laid back vibes, lush greenery, and relaxed people all hint that you’re not on China’s east coast anymore, although as a mid-sized city in China there are still 10 million people living there. It was due to some of these friendly locals that I really got to see the city and surrounding sights. While lying out on the roof of the Cloudland Hostel with a BeerLao and a book, I was approached by some really nice Chinese university students who wanted to hang out. One thing led to another, and before long I was zooming around the city on a mountain bike, playing badminton on campus, and eating like a king.

As I cycled out of the city with my newfound friends towards the shores of Lake Dian, it quickly became apparent that nature is all around; nature that I dearly missed in the concrete jungle of Shanghai. Kunming is located in a fertile lake basin on the northern shore of Lake Dian, the character of which （滇） serves as an abbreviation for the entire province, and is surrounded by mountains to the north, west, and east.

We climbed the Western Mountains 西山, edging our way along rock paths etched into cliff walls, following ancient mountain paths lined with towering trees, what was perhaps China’s cleanest and most modern public bathroom, and were rewarded by epic views at the Dragon Gate 龙门 over the sprawling lake with its various fisheries and the skyscrapers plopped down in front of even more mountain ranges behind. While these mountains were beautiful, they were no match for the monstrous snow-capped peaks we encountered deeper into the trip.

The next day, we explored more of the city on our mountain bikes. Kunming does an excellent job of capturing little pieces of nature for their city parks. Green Jade Lake Park 翠湖公园, located nearby Yunnan university, is a small park centered around a lake flush with lotus plants and fish. It’s a popular place for morning exercises, drinking tea and relaxing. While you’re there, don’t miss out on the old Kunming Municipal Pump House in the park. It used to pump water from Green Jade Lake’s spring-fed Nine Dragon Pond 九龙池 to the city’s water system from 1918 to 1957.

Venturing a bit further out of the city, you can find the Stone Forest and Jiuxiang Scenic Area, two incredible sights. The Stone Forest is about two hours drive away and is actually a formation of karst topography formed when limestone is dissolved by a weak solution of carbonic acid found in underground water, leaving imposing stone towers jutting up into the air looking like a petrified forest. The Stone Forest National Scenic is massive, covering 350 square kilometers, and is divided into seven scenic areas: Great & Lesser Stone Forests, Naigu Stone Forest, Zhiyun Cave, Long Lake, Moon Lake, Dadie Waterfall and Qifeng Cave.

The Jiuxiang Scenic Area is also a by-product of karst topography but instead of limestone dissolving away to expose stone towers, limestone within sturdier stone dissolved away to form caves, natural bridges, valleys, rivers and waterfalls. In Chinese fashion, these subterranean caverns are illuminated by neon lights. It, thankfully, feels mysterious rather than tacky. Special formations are given names like “The Fairy’s Palace” and, my favourite, “Posture in Lying of an Old Immortal Man after Drunkenness”. At one point the twisting snake-like river that plunges in and out of cave systems is tame enough for a paddle powered boat ride. After finishing the ride and climbing out of the final cave, or alternatively, old muscular men will also carry you out of the cave on a seat balanced between bamboo poles for a fee, there’s a cable car over the tops of pine trees to return to the scenic area’s main gate where a few stalls of noodles and stinky tofu await famished guests.

Speaking of food, Yunnan has some fantastic specialty foods, and I sampled one of the most famous, Over the Bridge Rice Noodles, while in Kunming. Local legend tells of a tale of an ingenuous wife solving the problem of cold broth and soggy vegetables and noodles by carrying hot broth with a layer of glistening oil to top to retain the heat over a bridge to a small island where she then mixed in noodles and vegetables to feed her scholarly husband. Regardless of local lore, these noodles are still awesome in modern times. Nowadays, you can grab these noodles with raw quail eggs, ham slices, chicken, mushrooms, scallions, spicy chilies green leafy vegetables, rice noodles, and can even choose to add in seafood at popular chains like The Brothers Jiang.

Kunming, like China, is changing rapidly. I visited Kunming in August of 2011. Since then, they’ve built a completely new airport, a subway system has begun operations, and countless old neighborhoods have been razed for new high rises. The rapid growth of the city is causing congestion problems and turning the ever-blue skies to ubiquitous China gray. With grand expansion plans for making Kunming a major player in the economics of the region, I fear Kunming may no longer be recognizable to me, but I’d like to go back and see for myself.
One last great thing about Kunming is how easy it can be to get away. With direct flights to multiple destinations in Southeast Asia as well as bus and railway connections to domestic Chinese destinations, it serves as a base for exploration. After savoring the city a tad shy of a week, I hopped on a sleeper train to Dali.

Check back on The Chairman’s Bao soon for a glimpse into the banana pancake trail, hippy town of Dali!

Just in case you missed it, here’s my introductory blog to my Yunnan travels.