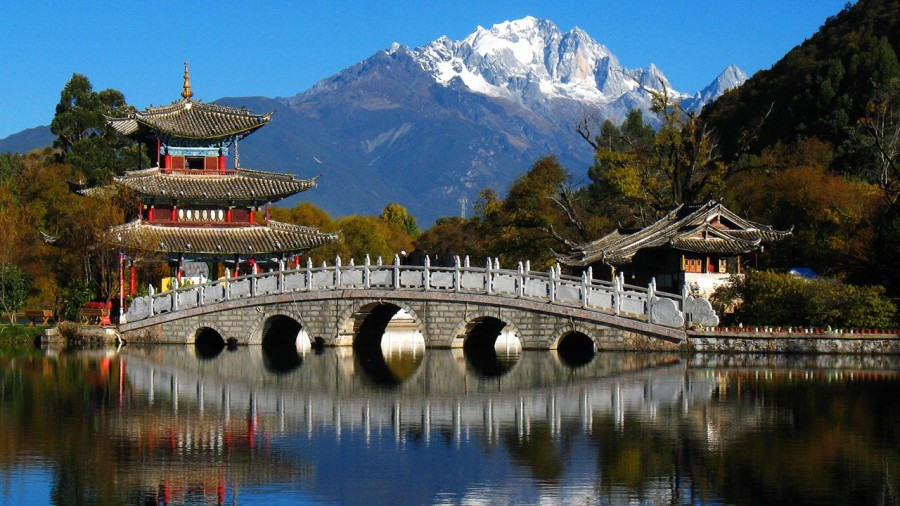 How were we ever going to beat the old town of Dali, sandwiched between gorgeous mountains and a pristine lake? – Well, with an even more ancient city replete with snow-capped mountains, a river valley, a narrow maze of cobblestone streets and more yak meat than you can shake a stick at, that’s how. The entire old town of Lijiang is classified as an UNESCO World Heritage Site, and is the seat of the ancient Naxi or Nakhi people. Their language is one of the few in the entire world that still uses pictographic and ideographic glyphs, although few can read and write them today. Thousands of scrolls were destroyed and the language hunted down during the upheavals of the Cultural Revolution. Thankfully, it survived, and is seeing an attempt at revival with street signs and shops labeled with the glyphs, although smaller and less prominent than the accompanying Chinese characters. It makes for a fascinating linguistic experience seeing those pictographs around town.
First things first though, we had to get there! There are none of the flashy bullet trains out here in the Western frontier, zipping along like on the East Coast, but the old-school slow train from Dali does the job in just about two hours for a minimal fee of 34rmb. As happens on trains in China, be prepared to make some friends, especially if you have some Mandarin skills. One family settled down next to us on the bunks, and their little daughter plopped right down on my friend’s leg and started to play with her phone. Just go with the flow.

After arriving at Lijiang station, we had to traverse the remaining 7km to the old town. The new development is a rather drab and boring affair, like most, if not all, new developments in China. Feeling tired of the packed buses and taxi touts who refused to start the meter, we settled on sharing a small passenger van with fellow wary travelers.

Stepping out into the old town, we instantly could feel a different vibe than in Dali. They are both old cobble-stoned towns set alongside prominent mountains, but the hippies were gone, leaving behind a rugged Tibetan-yuppie vibe. The visitors here seemed new money, less carefree and more in a hurry to do something. Perhaps the scraggly haired drum circles were hiding away in the river valley away from the crowded tourist infested streets. Crowded as they were though, the town was absolutely beautiful – as well as dangerous! One could very easily lose their way in the labyrinth of similar looking roads, slip, and dive right into the canals; especially after a few beers! But at least there weren’t any suicidal drivers and aggressive e-bikers, which is quite a relief from the usual chaos of Chinese streets.

We were quite content the first day to attempt to gain our bearings and mostly just ambled around town sampling yak yogurt with honey; and muesli with fruit, while following the lingering scents of roast yak meat. Don’t miss out on the local fried white cheese with sugar sprinkled on top or the baba flat wheat bread that comes in a savoury chili version as well as sweet honey.

By the evening, we still hadn’t found our away around, but enjoyed strolling through the alleyways, stumbling upon more wild cannabis plants sprouting up like weeds, (haha!) and watching the residents wash their clothes in the canals just as their ancestors did hundreds of years ago. Fortunately, we wound up back in the main square (Sifang Jie) just in time for the evening bonfire at 7pm. The local bar scene is also centered around this street with watering holes set in old wooden buildings with traditional red lanterns swaying with the bass of obnoxious blaring repetitive techno beats. Garish LED lighting and black lights illuminated tables of local ballers rolling dice while chugging green tea and whisky. I recommend drinking outside of said establishments, then visiting the area to buy a little Styrofoam wishing boat with a little candle to set afloat down the canals. Don’t worry though; it’s eco-friendly – small nets are set downriver to recycle all the dreams set free by young drunks.

I’m a little embarrassed that my time in Lijiang was relegated to strictly the old town, and I didn’t venture out to visit the stunning natural beauty in the area including: the view of the entire Li River Valley from Lion Hill, the White Water Terrance with bubbling spring water, and the various meadows with killer settings and hairy yak, but I feel justified in the fact that my body was beaten after the endurance bike ride of Dali and that the next day we were off to the border of Yunnan and Sichuan provinces for yet another marathon bike ride. Whew, I’m feeling tired just thinking about it.

Now, go enjoy the new layout of The Chairman’s Bao, learn some new words, and check back soon for the next adventure in Yunnan.

Check out some more of Dave’s adventures in our blog travel section.