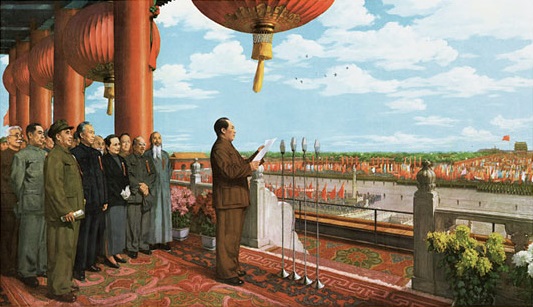 In light of China’s National Day 国庆节 【國慶節】 guóqìng jié last week – Sunday 1st October – it seems only fitting to take a look back at October 1st 1949, the day of the formation of the People’s Republic of China (PRC).

Mao Zedong 毛泽东 【毛澤東】 was born on December 26th 1893 in Shaoshan village, Hunan Province, China. He was one of the founding members of the Communist Party in China, and was involved in their development and revolutionary rise to power from the very beginning. Having been one of the key figures that steered the party though the Civil War with the Chinese Nationalist Party 国民党 【國民黨】 guómíndǎng (intermittently between 1927-1949/50), as well as the Japanese invasion during World War II, it was clear he was made for leadership.

China in 1949 was still a torn and damaged country; after a civil war and a foreign invasion, this was perhaps to be expected. It was under the leadership of the CPC that structure and national stability appeared to reemerge. The first step was to reverse China’s economic habits and drive forward progress through government institutions and the strength of the people.

The Proclamation of the Central People’s Government of the PRC made by Chairman Mao Zedong at Tiananmen Square on October 1st 1949, reflected not only the new power of the government but also China’s new identity on the world stage:

China’s nationalism and unity is epitomised in it’s National Anthem ‘March of the Volunteers’.  Originally written by Tian Han in 1934, it became China’s official anthem in 1949.

Arise, ye who refuse to be slaves!

With our flesh and blood, let us build a new Great Wall!

As China faces its greatest peril

From each one the urgent call to action comes forth.

Millions of but one heart

Braving the enemies’ fire! March on!

Braving the enemies’ fire! March on!

March on! March, march on!

Check our blog section for everything learning China, life in China, Chinese food, and more!