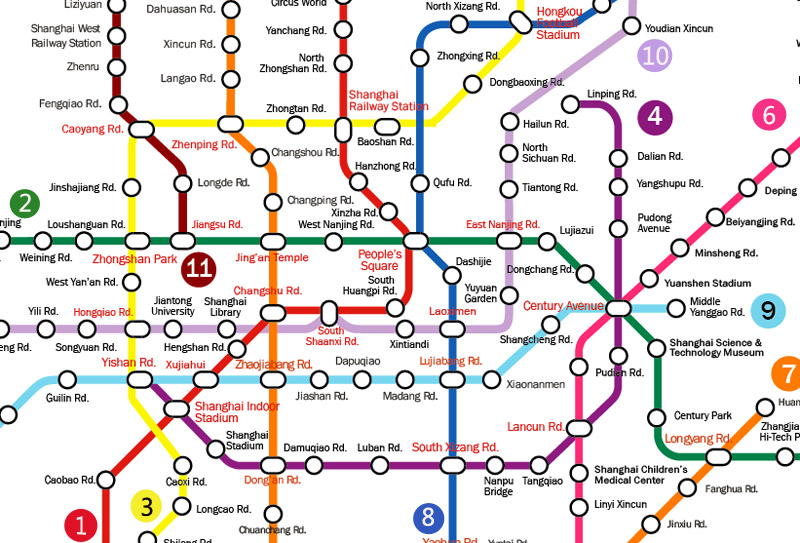 The Many Faces of Shanghai Metro Adverts

No matter where we are, whether we are riding buses, watching TV, checking our emails or going to the supermarket, we are constantly having our attention vied for by advertisements. Advertisements are often useful and informative; they can help us discover useful apps or promotional discounts, and yet now and then they are simply bizarre and irrelevant.

This blog is aimed at offering an insight into what exactly the 9.3 million people who ride the Shanghai metro system every day are looking at. Shanghai, being one of the largest cities in the world and therefore home to one of the largest underground transportation systems in world, has an enormously large and powerful commercial audience. Here are just a few examples of what people living in Shanghai see on a day-to-day basis as of April 2017: 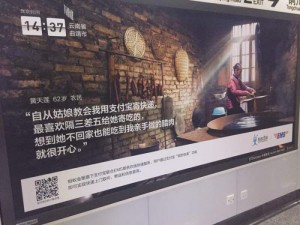 Direct translation: ‘Since my daughter taught me to use Alipay express delivery, her favourite thing is for me to send her food every few days, it makes me think that though she can’t come home she can still eat my homemade cured meat and feel happy’

The first advert is for the third-party online money payment app, 支付宝/Alipay. This app is used all across China as a safe and secure system for people to deposit and transfer their money, and to receive and make both commercial and personal payments. Alipay already has a huge customer base, and is used by millions of Chinese citizens everyday. Seemingly, one of the most direct ways Alipay chooses to inform their current and potential customers of new products is on the metro system.

The newest series of Alipay adverts depict several stories from people’s lives around China and how they utilise Alipay. For instance, in the picture above the elderly woman from Yunan uses the Alipay app to find a delivery service to send her daughter her homemade 腊肉 (cured meat). Within the series Alipay also advertises its new loan insurance system and ID verification function.

This series of adverts is visually very appealing and as described by a teacher from Nanjing: ‘is a good way of advertising as they use stories, which makes it more interesting than just directly telling customers what it is.’ She went on to explain that because the locations of the stories are often villages they appeal to everyone, as a lot of people who live in Shanghai are from the countryside or smaller towns so feel emotionally connected to the advert. 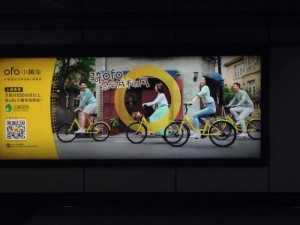 The second series of adverts that have taken over Shanghai recently are that of the city bike rental company OFO. OFO provides bikes that can be rented for as little as 1 yuan and can be left and locked at any street location throughout Shanghai. This has proven to be a cheap and convenient method to improve Shanghai’s public transportation, though perhaps it is a bit odd being advertised in the metro, which is presumably a competitor for cheap transport.

Regardless, these bikes are becoming increasingly popular and as a Shanghai resident pointed out OFO’s adverts portray a ‘very relaxing environment which makes them feel like spring is here.’ However, OFO has recently come under some criticism in regards to the safety of their bikes, as well as not having a bike tracking system so people often just take them home. In response, OFO has spent large amounts of money on advertising, which their main competitor Mobike has not. As one person put it ‘because everyone uses Mobike, OFO can only attract new customers though these advertisements.’ 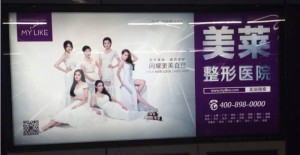 Plastic surgery. As bizarre as it would seem for westerners to find plastic surgery adverts plastered across the London Underground, it doesn’t feel out of place at all for a lot of people in Shanghai. Plastic surgery, from a foreigner’s perspective, seems like a very normal and popular thing among the Chinese. After all, adverts for cosmetic surgery can be seen practically everywhere, and the clinics are not hard to find. However, upon further inquiry it seems that not all people feel it is the norm.

Though the advert clearly shows beautiful looking women in white dresses (apparently not wedding dresses), some female members of the Shanghai public have expressed their dislike of these adverts.  They explained they don’t like them because of  ‘身体发肤受之父母’, which is essentially the idea that your parents gave you your body and you ‘should be the same as you were when you were born, you’re special and shouldn’t be like what people think pretty is’. One positive feature to note about this advert however is that shows numerous locations where their company can be found, which to some people makes is appear more trustworthy than other companies. 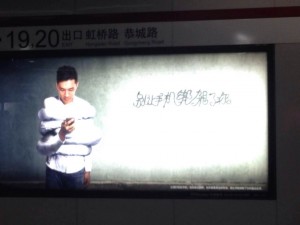 Though its not clear who commissioned this advert (potentially the Shanghai metro itself), it’s message is, however, very clear and relevant. Whilst walking through the Shanghai metro system it is, unfortunately, not uncommon to see someone walking and looking at their phone at the same time. Arguably, in a modern day city this habit is not considered strange, as technology has become a large part of our lives. It seems as cities get bigger and busier the younger generations will use their phones increasingly more often, not to say that this is limited Shanghai but the Shanghai metro is certainly often full of people who are starting down, with their head buried in their phone. The name for these people is Chinese “低头族” aka ‘smartphone addicts’.

These adverts have been met with mixed responses. One passenger of the Shanghai metro said that ‘although I know it’s this way and it’s not good, I will still use my phone. This advert won’t make me change.’ Whereas another passenger noted that she thought the adverts were ‘很值得写’ – really worth writing. Perhaps at some time or another we are all guilty of using our phones too often, but its important to remain aware of the world outside technology, especially to avoid bumping into people on the metro. 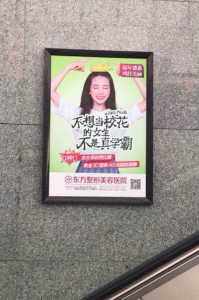 This final advert is actually from the metro system in Zhengzhou. Again it is in reference to plastic surgery, however this advert seems to be grasping for a very particular audience. While the woman in the advert appears to be far too old to still be attending high school or middle school, the company is quite apparently directing is efforts at young school girls.  As discussed above plastic surgery is certainly an easy to come by commodity in China, but this advert’s customer-base is virtually limited to students, but in reality, middle-school student have a lot fewer opinions towards plastic surgery than other members of society. As one office worker from Xi’an points out ‘its pretty far-fetched because a ‘top-student’ will study very earnestly and seriously, they will simply by no means concern themselves with whether or not they are the ‘campus-belle’. They are only concerned with whether or not they have the highest grade in the year.’ She also went on to describe that the ‘campus-belle’ is a really rare type of person, so are ‘top-students’. So it seems for ordinary people who don’t grow up particularly pretty or particularly ugly, and who don’t study very well or very poorly, this advert has no meaning.  Overall it seems this is one of those bizarre adverts that can be happened upon from time to time.

Feel free to share the types of adverts you have experienced on the metro in China on our social media channels or contact us here.