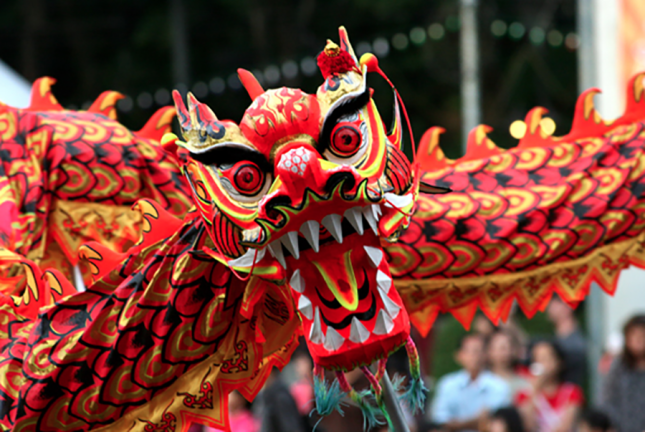 In ancient times people truly disliked the coming of the New Year as it meant that a disaster 灾难 【災難】zāinàn was also on its way! This disaster came in the form of a terrifying and aggressive Beast, who loved to sleep and usually lived at the bottom of the ocean 深深的海底【深深的海底】shēn shēn dì hǎidǐ. It slept for 365 days of the year, but on the evening of the 365th day it awoke and crawled out from the bottom of the ocean to find something to eat. On this day everyone called out the warning 警告【警告】jǐnggào “New Year is here! New Year is here!”

As the Beast emerged out of the water, the land was flooded by a great mass of water, and everything the Beast laid eyes on: humans, animals, everything living was devoured until there was nothing left 被吃的精光【被吃的精光】bèi chī de jīngguāng. Because it had been so long since the beast had eaten anything, it was mad with hunger. Everyone was so terrified of the New Year Beast that every winter they would begin to prepare dried food 干粮【乾糧】gānliáng and get ready to journey up into the mountains to hide from the Beast.

One year, a freezing winter 寒冬【寒冬】hándōng arrived, the north wind blew and blew, and large snowfall covered the ground. All the villagers, both old and young 老老少少【老老少少】lǎolǎoshàoshǎo were hurriedly preparing the dried food to carry up the mountain. The village leader suddenly cried out “New Year is here! New Year is here! Everyone hurry!”

Soon the only one left was Granny Ding 丁老婆婆【丁老婆婆】dīng lǎopópo, last year the Beast had eaten her son, and had face great loneliness and sadness 难过【 難過】nánguò ever since. So now she would stay and face the monster that had taken her son from her.

As the entire village was packing up to leave, an old beggar suddenly appeared leaning on his walking stick 拐杖【拐杖】guǎizhàng. He hobbled in front of the villages and said: “Please, does anyone have a little something to eat? It has been so many days since I have last eaten.”

But, the villagers were in such a hurry to get up the mountain and hide away from the Beast, that nobody paid him any attention.

Soon after he looked around and saw that the whole village had been abandoned, and he still hadn’t had anything to eat, he was extremely disappointed 失望极了【失望極了】shīwàng jíle. As he was just about to leave the village, Granny Ding saw him and said: “Mr, I have some left over dumplings 饺子【餃子】jiǎozi that I made yesterday, would you like to come and try 尝尝【嚐嚐】 cháng cháng some?”

The old beggar was so happy and he hurried over the Granny Ding’s house and started to eat the dumplings. After he finished eating he patted his stomach 拍拍肚皮【拍拍肚皮】pāi pāi dùpí and said: “Strange, why has everybody left in such a hurry to go up the mountain, and yet you are still here?”

Granny Ding sighed 叹口气【嘆口氣】tàn kǒuqì, tears began to appear in her eyes as she described what the Beast had done to her son the previous year. She finished her tale by saying: “The New Year Beast will be coming soon, you’d better hurry up the mountain now you’ve finished your dumplings. That way you’ll avoid being eaten.”

Who knew that when the old beggar heard these words he would begin laughing! He replied: “Oh I thought everyone was leaving the village because of some horrible situation, but as it turns out it’s because of the New Year Beast. Now that’s too easy, don’t be afraid, this evening when the Beast arrives I’ll bring him until control.”

Granny Ding opened her eyes wide 大了眼睛【大了眼睛】dàle yǎnjīng, she said: “What? You’re not afraid of this fierce 凶恶【兇惡】xiōng’è creature?”

The old beggar calmly replied: “If you provide me with a piece of red cloth and two pieces of red paper then that will suffice. Oh and the dumplings were really very tasty 真好吃【真好吃】zhēn hào chī, in a while would you mind chopping up some filling 馅【餡】xiàn for some more dumplings, then we can eat them together tonight.

Granny Ding was confused, yet dutifully went off to find the red cloth and red paper, then return to the kitchen to begin preparing the filling for the dumplings (chop, chop, chop 笃笃笃【篤篤篤】dǔ dǔ dǔ).

The old beggar then pasted the two pieces of red paper along both sides of the doorway, and wrapped himself in the red cloth. He then lit his walking stick with the fire that burned in the living room (crackle, crackle, crackle 噼里啪啦，噼里啪啦) 【劈裡啪啦】pīlǐpālā. The chopping of the filling and the crackling of the burning walking stick made such a racket!

The sky had already turned dark, when from the depths of the ocean the Beast awoke and crawled up towards the land. Its whole body was covered in green scales 绿色鳞甲【綠色鱗甲】lǜsè lín jiǎ and the inside of its large mouth was blood red. It came step by step 一步一步【一步一步】yībù yībù towards the village, and looked all around with its big eyes so find somebody to eat. But then the Beast heard a strange sound coming from across the village.

This sudden sound pierced through the Beast’s ears like a knife, and made it feel such a great discomfort.

When Granny Ding heard Beast cry out, she felt a shiver of fear run through her entire body, and the knife in her hand began to chop even faster.

Howwwwl!! The Beast simply couldn’t bear such a terrific noise, and began to cry out in agony, searching all around to find the source of the noise.

But when it saw Granny Ding’s house with the red paper pasted up outside, it felt like hundreds of thousands of needles 千万根针【千萬根針】qiān wàn gēn zhēn were piercing its eyes. The Beast hurriedly shut its eyes and turned away, but it was already too late! With the deafening sounds and the bright red colour the Beast was now terrified 吓坏了【嚇壞了】xià huàile.

The Beast quickly ran back to the sea and swam back down to the depths. From then onwards, it didn’t dare 不敢【不敢】bù gǎn return.

The next morning, when the villagers returned they were all extremely surprised 惊讶极了【驚訝極了】jīngyà jíle to find that Granny Ding was still alive. She told them everything that had happened the previous night, and they happily replied: “Amazing! From now on every year we simply need to chop up filling to make dumplings, wear red clothes, and lit walking sticks on fire, then we won’t need to be afraid of the Beast coming to eat us.”

According to legend, the say that the Beast was chased away was called New Year’s Day. Nowadays, the methods of keeping the Beast away have changed into simpler traditions. Instead of lighting bamboo walking sticks, people now set off firecrackers  鞭炮【鞭炮】biānpào, and the red paper which was pasted on the doorway are now know as Spring Festival couplets 春联【春聯】chūnlián. People also like to wear new red clothes on New Year’s Day.