In early October, the IPCC released a report showing the devastating impacts climate change will have on our planet. They outlined how we can spare some of the damage if we make the ambitious stride of containing that to 1.5C.

Following this report, there seems to have been a culture shift towards being sustainably aware by reducing our carbon footprint and amount that we send to landfill. Consumers have been making their own changes where they can – whether that’s by reducing consumption of meat and dairy, avoiding single use plastic or moving to sustainable clothing rather than fast fashion. As a consumer we hold power, but those who really have an impact on our environment are those who sit in the seats of government and directors’ boards.

Currently, China is the world’s biggest emitter of greenhouse gasses, emitting more than the US and EU combined.

This is driven by China’s coal-reliant industries, a non-renewable energy. However, China’s coal use and carbon emissions saw a drop between 2013-2016. China has moved towards becoming a more energy efficient economy and is working on cleaning up its energy resources.

If China carries on in this direction, it is predicted that they will peak in emissions by 2030 and will begin to fall after that. So, how are they doing it?

Power generating plants will now have to decide between either paying for their emissions or cleaning up their act with the new emissions trading concept.

The emissions trading concept is simple: to reduce greenhouse gases (GHG), countries and organisations receive permits to produce a certain amount of CO2 and other GHG’s. They can either choose to produce within these boundaries, or buy emissions permits from other organisations which don’t hit their quota – in turn capping overall GHG output.

2. Reducing coal consumption
China is the single largest coal user in the world, with 60% of it used in its energy mix. However, between 2013–2016 coal consumption saw a decline and is predicted to continue declining supported by policies and structural change in the economy as it moves from an export-driven economy to one sustained by services and domestic consumption.

It is expected that by 2030 at least 20% of China’s energy will come from non-fossil fuels! 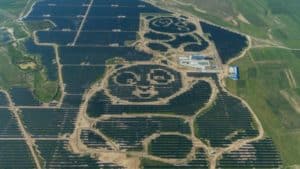 4. Hybrid and electric cars
Chinese consumers have moved towards buying hybrid and electric cars as a result of incentives provided by the government. Incentives include removing them from city’s competitive registration plate lottery and even providing subsidies of up to $8,475 per vehicle! In addition to this, Shenzhen authorities announced in 2017 that it had replaced over 5,000 buses with electric ones! 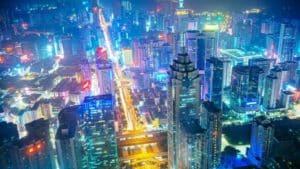 6. Building high-speed railways
China has just released plans to build its first railway tunnel under the Yangtze River. It will span 265km with a designed speed of 350km per hour.

Aeroplanes account for roughly 3% of total global emissions. 1 flight produces 3 tonnes of CO2 per passenger. By taking the train you cut that figure in half! Trains have shown to be less harmful to the environment than planes, so by China investing more into high-speed railways it demotes the use of air travel. 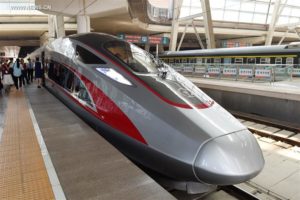