Belfast Zoo has made an appeal after the rare red panda escaped yesterday. The zoo has reported that he has gone to take “in the sights of beautiful Glengormley” just outside of Belfast.

Drivers have asked to be vigilant as the red panda is not used to the rules of the road yet. Although these animals are typically not vicious, they may become defensive when approached. People of Glengormley have been asked to keep an eye out for their “curious friend” so they can bring him back as soon as possible!

Last June two red panda cubs were born in Belfast Zoo as a part of a conservation project. They were born to a red panda from the Netherlands and another from Germany. Red pandas typically develop slowly and are born blind, so it takes a long time for them to venture out. These cubs only started venturing out in late 2018! 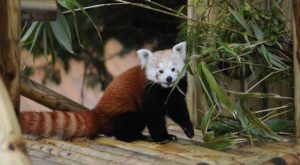 What is a red panda?

The red panda is native to Southwestern China and the Himalayas. They are just a little bigger than a domestic cat. Despite the name, they are actually closer to the raccoon and weasel family, and are not actually closely related to the giant panda. They are typically nocturnal and have long thick tails to maintain balance as they spend most of their time up trees.

Sadly, the International Union for the Conservation of Nature believes that the red panda is at high risk of extinction. There are only roughly 10,000 left! The animal is frequently poached for its fur and its habitats are becoming increasingly destroyed. Conservation mechanisms have been put in place, for example China has 35 protected areas, covering 42% of the red panda’s habitat. In Chinese the red panda is called hóngxióngmāo (红熊猫/紅熊貓). Other names in English include the lesser panda, due to its size relative to the giant panda, or firefox.

Want to know more about what China is doing to battle climate change? Click here to find out!