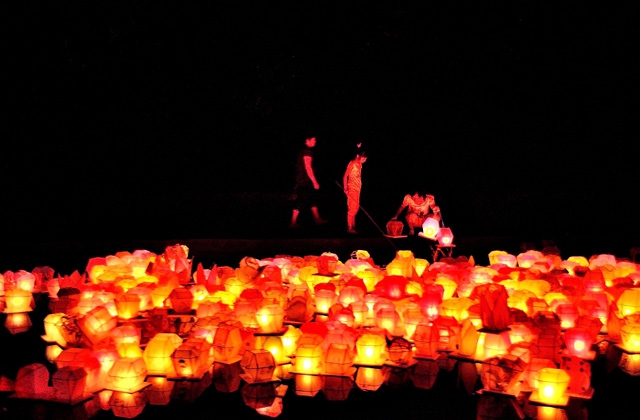 China has an entire month each year in which is it believed the gates to hell are opened and the spirits that are normally trapped inside are free to roam. During this ‘Ghost Month’ there are certain traditions which are observed to ensure you stay on the right side of ghosts and spirits. This blog will introduce some of the things you should and shouldn’t do to stay lucky, and some of the rituals that mark the month, as well as some of the key vocabulary you should know to survive any Ghost Month in China. For starters, you should avoid swimming or staying home alone at night as the ghosts wonder the streets looking for fun. Thought Halloween was spooky enough? Think again…

Although there is no ‘Halloween in China’ as we know it in the West, Hungry Ghost Festival falls on the 15th day of the seventh lunar month. It is thought that on this day the ghosts and spirits visit homes and people make sacrifices to their ancestors, as well as other ghosts and spirits. Incidentally, Halloween as we know it was a tradition for the Celts in Britain, who also believed that ghosts could flow freely between life and death. Hungry Ghost Festival is one of the most important dates in the Lunar Calendar for offering sacrifices to the deceased, alongside Tomb Sweeping Day. As ghosts seek out their enemies it is feared that they may harbour general ill feelings, so people in China often take precautions to ensure they keep the ghosts happy. Hungry Ghost Festival is an important observation in both Buddhist and Taoist belief, and is also an important date in folk history in China, as well as elsewhere in Asia.

On the first day of Ghost Month, people burn paper money in the streets and temples that is thought to provide the ghosts the money they need for the month. People also make other offerings to the ghosts such as burning incense, offering food and hanging red lanterns, in the hope that they won’t bring them any harm.

On the last day of Ghost Month, the gates to hell are finally closed and people celebrate by making further offerings such as paper money and clothing. Pictures of ancestors are hung back on walls and people often feast as a family, leaving food over for their ancestors to enjoy that night as they sleep.

Hungry Ghost Festival itself falls on the full moon at the end of summer, and often begins with a parade of decorated lanterns which are carried to the water and lit. It is said that the boats give direction to lost ghosts and spirits, who are then able to find their way to the food and money offerings. On occasion, the lanterns are printed with the name of a deceased family member. It is thought that the longer the boat floats before burning and sinking, the more luck that will be brought to the family in the coming year.

Looking to protect yourself for Ghost Month or Hungry Ghost Festival? See below for some common dos and don’ts that people observe in the month (there are also many more which can vary between provinces and even families!):

Peachwood swords ward off evil spirits and are often placed at the entrance to homes during Ghost Month.

The burning of offerings on Hungry Ghost Festival – putting Bonfire Night in the UK to shame!

Besides evil spirits, it is also said that restless spirits who were not ready to leave the earth at the time of their death, as well as those who were not afforded a proper burial, or were treated badly by their families, can look to seek revenge during Ghost Month. Like many other aspects of Chinese culture, Ghost Month serves as a reminder to honour filial piety. Don’t forget, you should save your mother ahead of your girlfriend in the event of a fire (TCB premium article).

Are you a Mandarin teacher? For some excellent classroom activities on Ghost Month, check out the Mandarin Excellence Edublog’s Teacher’s Mastersheet and Student Worksheet for some brilliant spooktastic ideas!

Enjoy the upcoming Halloween celebrations and we’ll see you for Ghost Month 2017!