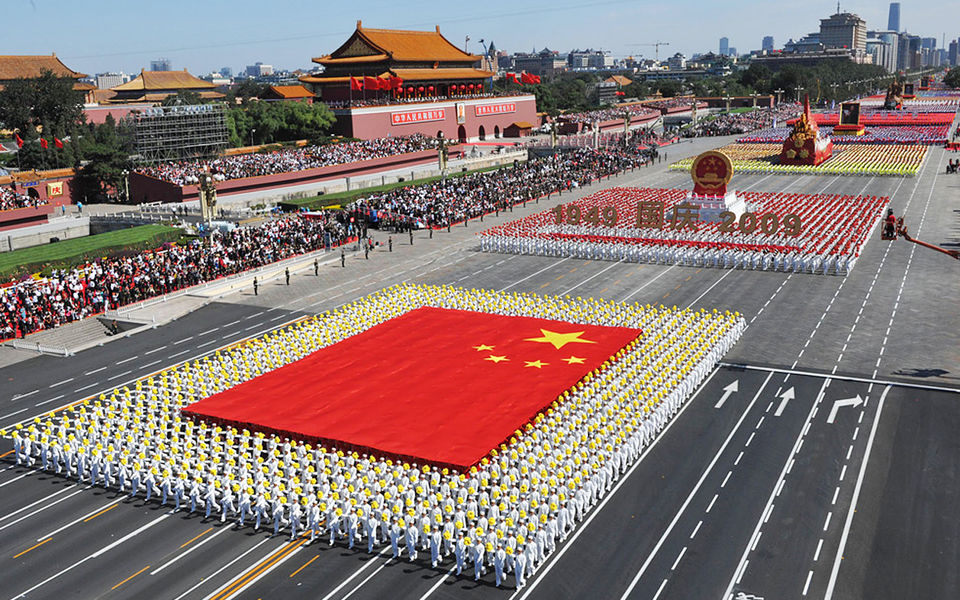 National Day in China is celebrated this coming Sunday, with most people having an entire week off work. The holiday is to commemorate the founding of the PRC on 21st September 1949. The week of festivities begins with National Day on 1st October (this Sunday), with Mid-Autumn Festival celebrated on the 4th October (Wednesday). Mooncakes and flags at the ready, here’s our lowdown of what to look out for this coming week!

Alongside Spring Festival, National Day holiday is one of two “Golden Weeks” celebrated each year in China. This year marks the 68th celebration of National Day in China.

Huge crowds gather in the morning to watch the flag rise over Tiananmen Square. The national anthem is played as the flag is raised.

The flag-raising ceremony is followed by a huge military parade and review of troops at Tiananmen Square.

Changing of the Portrait of Chairman Mao

The portrait of Chairman Mao has been changed at Tiananmen Gate Tower each year since 1949. Ge Xiaoguang has been the artist since original painter Wang Guodong retired in 1977. It takes up to 50 days of intensive work each year to complete the work!

Each National Day, companies in China hang red lanterns and banner scrolls. Balloons and sculptures also decorate many public spaces. Be sure to look out for them if you are currently on your travels in China! Fireworks are also set off to brighten the night-time sky.

Many Chinese people choose to use the National Day holiday to travel and see family. Over 650 million trips are expected during the week, so if you’re planning to travel be sure to avoid busy tourist spots and public transport wherever possible! Transport authorities have promised to put more than 840,000 mass transit vehicles into operation to facilitate the huge movement of people… incredible!

Why not try cooking traditional mooncakes for Mid-Autumn Festival this coming Wednesday? Check out this video blog recipe from Mao to show you how.

Be sure to make the most of the upcoming holiday if you are currently in China!