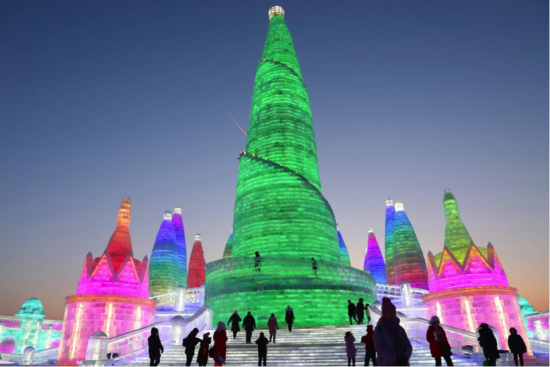 The Awe-Inspiring Sculptures from the Harbin Ice Festival 2018
Chinese Culture,Travel
02/03/2018

The world’s largest ice festival began in January 2018 in Harbin (哈尔滨 – Hā’ěrbīn – Harbin) a city in the north-eastern part of China in the Heilongjiang province.

The Harbin International Ice and Snow Festival features thousands of incredible ice sculptures. The most spectacular of these works are the massive and elaborate recreations of castles, historic landmarks and famous figures, lit up at night in dazzling bright colours.

What is perhaps the most extraordinary fact regarding the event is that the ice is sourced exclusively from Harbin’s Songhua River! According to a China Daily report, more than 50 farmers worked for 20 days to supply Harbin International Snow and Ice Festival’s sculptors with blocks of ice from the river.

The city first introduced the icy event in 1963 with the Ice Lantern Garden Party, which was a celebration of the long-standing tradition of creating lanterns out of hollowed-out blocks of ice. The first iteration of the larger festival began in 1985 and added sculptures, which have subsequently grown in both number and size year on year. The city also currently holds the Guinness World Record for the largest snow sculpture, measuring in at a massive 656-foot-long and 115-foot-tall landscape, which was created at the 2007 festival. 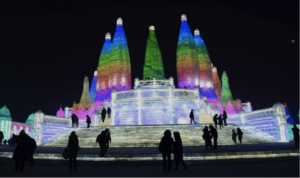 In 2017, 18 million people attended the festival with the 2018 event poised to eclipse even that! Temperatures in the past at the festival have reached as low as -31 degrees Fahrenheit, but that doesn’t stop visitors from partaking in the festival’s activities, which include ice swimming and mass ice weddings.

In 2018 attendees can expect an ice replica of Moscow’s Red Square and Bangkok’s Temple of the Emerald Buddha, as well as works by artist Han Zhenkun based on the country’s famous Silk Road.

Han Zhenkun stated that “Back then, through the Silk Road, exquisite art works from China like potteries were transported by camels and horses to the Western world,” Han added, “Art has no borders. It’s an abstract language. We communicate with our works in this international competition. It means a lot”.

For more information on the icy going-ons in Harbin, read some of our premium articles including: