Home » Blogs » Business & Economics » Does Ofo’s Punctured Fate Signal the Beginning of the End for the Sharing Economy in China? 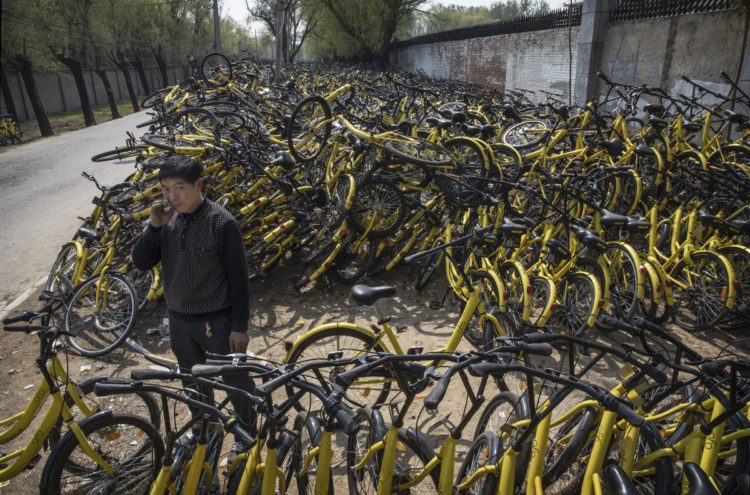 Does Ofo’s Punctured Fate Signal the Beginning of the End for the Sharing Economy in China?

The bright yellow bikes of Ofo have become a familiar site on the sidewalks of Shanghai and Beijing. Once pillars for the booming sharing economy in China, many of the bikes now lie in varying states of disrepair, with over 12 million users demanding the return of their deposits as faith in the start-up wanes and users struggle to find working machines.

Does Ofo represent an overall decline in trust and demand for the sharing economy in China, or has operational inefficiency led to its near-demise, as the sector around it continues to flourish?

The Decline of Ofo

In 2017, I wrote two articles on the rising sharing economy in China, and bike sharing in particular. Even then, problems were beginning surface, such as that of an umbrella-sharing start-up that had 300,000 of its umbrellas stolen in the first few weeks of operation.

Ofo at its peak was a trailblazer. Its dockless bikes could be picked up at the touch of an app by scanning a QR code. The bikes could then be left anywhere for the next customer to pick up. The Company quickly grew to a value of $2 billion – its advertising campaigns which featured fashionable influencers cementing its place as an icon of China’s young and affluent middle class.

Its operation quickly grew to over 20 countries – raising the eyebrows of some investors – but that didn’t stop them ploughing millions of dollars into its expansion. In light of recent spiralling costs, Ofo has been forced to withdraw from many overseas markets and has started selling off assets, such as bikes for as little as $2.

“In retrospect of course there was problem with management, and we were expanding too rapidly,” commented a former Ofo executive who worked on international expansion, but refused to be named.

The CEO of Ofo has been blacklisted by the government in China as they attempt to claw back some trust in the sharing economy into which they have invested so heavily. Dai Wei has been banned from any “excessive spending”, which prevents him from sending his children to expensive schools, taking first class travel, or buying cars. He has considered bankruptcy.

The Chinese government has been vocal in its support of the sharing economy in general, estimating that it will reach 10% of national GDP by 2020.

A queue of hundreds of people has been commonplace at Ofo’s head office in Beijing in recent weeks, as users try to reclaim their deposit (99 yuan / 199 yuan, depending when they signed up). This tension was further heightened by a Weibo user posting that he had received an immediate return of his deposit by writing to the Company in English, hinting that the Company’s treatment differs between Chinese people and foreigners.

Ofo’s further decline seems inevitable, with investors seemingly unwilling to put money into a firm that has lost trust among its userbase and the wider community. Its inability to turn a profit and the decrepit state of its fleet further the misery.

China’s Sharing Economy in the Future

The sharing economy in China is reaching a new, unchartered stage. Customers are demanding quality ahead of quantity and focussing on issues such as safety and trust (such as the swift return of deposits). In the past, sharing start-ups have spent vigorously to acquire new customers, with little thought for future profitability.

Government intervention – both central and local – will also play a rising role. An example of this is Beijing and other cities ruling that no more bike-sharing start-ups can add bikes to the already-cluttered streets.

2019 will mark a new beginning for the sharing economy in China, but there is still opportunity for a more considered approach to the market for existing start-ups and those yet to arise.