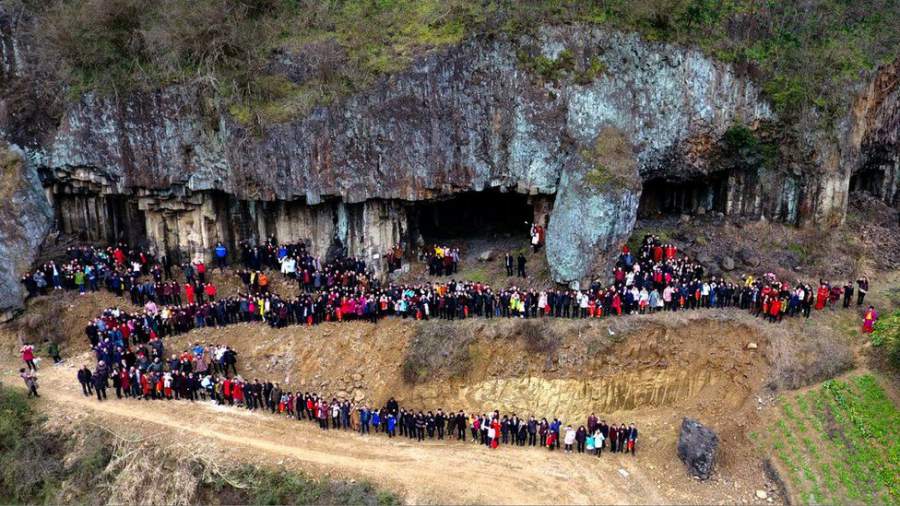 People in China often say “茄子(qiézi!)” [eggplant] instead of “Cheese!” to get the perfect smile in photos, but can you imagine the noise of 500 members of the Ren family all saying it in unison?

This special photo of 500 of the Ren family was taken at their family reunion at Shishe village in China’s eastern province of Zhejiang.

Village chiefs realised two and a half years ago that their family tree, which can be traced back 851 years, had not been updated for more than eight decades.

Village chief Ren Tuanjie enlisted the help of social media platforms such as WeChat and QQ, as well as local police stations, to track down his loved ones. He managed to track down over 2,000 of them spanning seven generations and brought 500 together for the special reunion.

The event was held during the Lunar New Year period last week, which families often mark with large gatherings and meals (as well as the inevitable group photos).

After over 30 minutes preparing everybody for the photo, photographer Zhang Liangzong took the picture with a drone in front of basalt formations near the village. Family members came from as far and wide as Beijing, Shanghai, Xinjiang and Taiwan. The oldest was 94 and the youngest just four years old.

Ren told state news agency Xinhua: “One reason was to understand where our descendants have spread to, where they have ended up and where they live, to account to our ancestors.”

“And another reason was also to let descendants all over the country know their roots, so that wherever they go they will not forget where they come from,” said Mr Ren, whose name means ‘reunion’ in Chinese.

As Chinese families continue to swap villages such as Shishe for life in the cities, events such as this are a rare occurrence, but still highlight the strong ties people in China hold with their roots and ancestors.