Back in 2015, president Xi Jinping vowed to clean up China’s toilets, declaring war on dirty public bathrooms. A means to improve standard of living, as well as to increase domestic tourism, the pledge was welcomed by the Chinese public and visitors alike. However, two years on, has China’s “Toilet Revolution” gone too far? Phone chargers, LCD televisions, wifi access, facial recognition toilet paper dispensers and fully-stocked drinks fridges would all seem to indicate that it has.

In the past few decades, China has greatly increased basic sanitation throughout the country. Only 2% of people still practice open defecation, compared to India where the figure sits much higher at around 40%. The World Health Organisation (WHO) states that three-quarters of the Chinese population now have access to toilets it deems “acceptable”, up from just two-thirds in 2000. Despite that, 70 million people in China still use shared facilities and up to 260 million rely on bucket toilets or open pits. With that in mind, it’s easy to see why a push towards cleaner, safer public toilets is a national necessity.

“We visited rural homes with air-conditioning, washing machine, solar water heater, motorcycles, cell phones, big screen TVs,” says Bai Lin, the World Toilet Organisation’s (WTO) China Project Manager, “but their toilets are very smelly dry toilets and not flushing toilets… If we are able to make toilets fashionable, just like a cell phone, a TV, or a dream, we can change the toilet culture of China.”

The over-the-top efforts of some to play up to the new scheme and win the favour of those above have left a foul smell around certain regions, and not the type cleaned by the high-tech air-conditioning units that dispel bad odour in some of the more extravagant new public loos.

Competition between local authorities has meant that the scheme has lost focus on its aim to improve basic sanitation. In parts it has descended into a “my best toilet is better than your best toilet”-type competition, prompting officials to call for a halt to the campaign. China’s tourism chief, Li Jinzao, states: “We don’t need local governments trying to outdo each-other with five-star toilets, we just need to build practical public facilities based on local conditions that are accessible and convenient.”

Around 70,000 toilets, costing upwards of US$3 billion, have already been constructed under the scheme, with another 64,000 due to be installed between 2018 and 2020. Through the initiative, toilets are giving a star rating from one to five stars. According to authorities, star ratings are given based on 58 variables, including ventilation, background music and the provision of toilet paper.

Even tech giant WeChat, China’s multi-purpose social media application for everything from instant messaging to mobile payment, is in on the act. Smartphone users can now draw their nearest public toilet within 2 kilometres from a cloud-computing platform connected to the app. The platform already includes more than 330,000 toilets across 2,288 counties and an English version is expected to be released later this year. The app was launched on World Toilet Day (November 19th), which China has aptly renamed “World Toilet Day and China Toilet Revolution Awareness Day.”

A scheme that started out with good intentions has turned into somewhat of a popularity contest between low-level officials. Here’s to hoping that local authorities can ‘clean up their act’ and set the record straight on the aims of the scheme. From my own trips through rural in China, it’s evident that a push towards sanitation will have a positive effect both for the local community and visitors.

Elsewhere, in 2016, Yunnan held a competition to select the most scenic toilets at tourist attractions in Asia, with some remarkable entries: 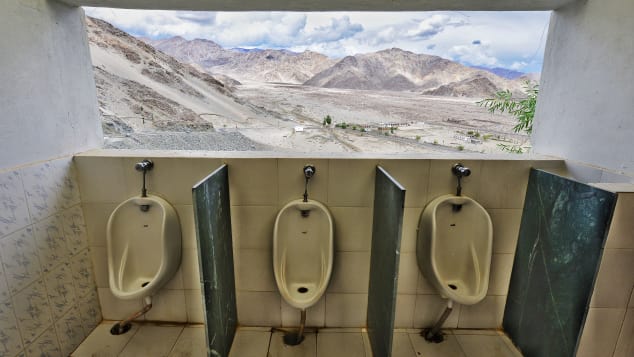 Feeling crappy? Why not study some TCB toilet-related lessons to brighten your day? Note that the following lessons are locked to premium subscribers: