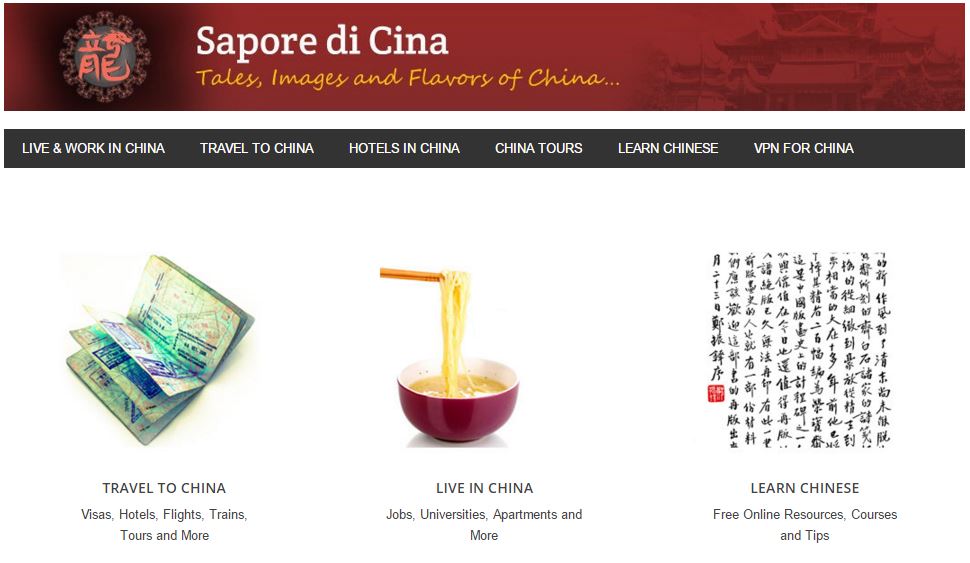 An Interview With Furio of Sapore di Cina

This week we caught up with Furio of Sapore Di Cina (SDC) to talk all things China. We have been fans of SDC for a long time and often share their articles on our social media channels, so we were delighted when he agreed to an interview. Here’s what he had to say (it’s also worth noting that his English is way better than he gives himself credit for!):

I moved to China in 2010 and everything was so… different. I felt overwhelmed by all the new input. And if there is something I love, it’s to dissect cultural differences, to understand why people with a different background to mine behave in a different way than I do (and why they do so). In this sense, ‘The Geography of Thought: How Asians and Westerners Think Differently… and Why’ by Richard E. Nisbett is one of my favourite books.

So, at the end of 2011, I started a blog – Sapore di Cina (SDC), which in English means ‘Flavour of China’ – in both English and Italian, my mother language.

I admit this wasn’t a very original idea: there were already hundreds of blogs written by Western expats in China, and today there are probably thousands.

The difference with SDC is that, after 6 months, I started to publish more practical guides. The first one was ‘60 Excellent Free Resources to Learn Chinese Online’, which was originally published in June 2012 with only 25 resources (we update it every year).

Then Sborto joined SDC, and we started to publish more and more practical guides, I guess because we both love to simplify and curate complex information. Nowadays we collaborate with 5-6 writers, all based in China, who publish on SDC on a regular basis.

As much as I’d love to say that people visit our sites solely because we write interesting stories, the truth is that most of our readers use SDC as a practical reference as we covered, or plan to cover, all the practical aspects of living and traveling in China, from ‘how to get a Chinese visa’ to ‘how to get a driving license in China’, through to ‘how to rent a flat in Shanghai’.

It’s difficult to choose just one, but I’d say ‘How to get poisoned and die of asphyxia in Xinjiang.’

Listen to everybody, but don’t take anything for granted.

Nowadays the world is full of ‘China experts’: the ones that will tell you that guanxi is the only thing that matters, that a relationship with a Chinese girl/guy will never work in the end because of the cultural differences, and that will list 10 reasons for which you will never learn Chinese because it’s too difficult. And so on.

What I learned – from both personal experience and the feedback of thousands of readers – is that all these things are either true or false, depending on the situation and on how you react to the problem.

For instance, while guanxi may be very important when dealing with a SOE (state-owned enterprise), it may be irrelevant when you are dealing with a private Chinese company, whose main interest is profit.

While some people never get to understand (or accept) the way Chinese girls/guys think and act, others have been happily married to a Chinese person for decades.

While it’s true that Chinese is a complicated language for Western people, due to the fact that we share no linguistic roots, it’s also true that I personally know a lot of people who speak Chinese better than I speak English (yeah, my English is not very good looking, as Celia Cruz said). It all depends on your attitude: move to Nantong and don’t speak with any laowai for a year. I’m pretty sure that your Chinese language skills will skyrocket. It’s simply a survival instinct!

Good question! I’m Italian and, although during the first years I used to write all my articles both in Italian and English, nowadays I only write in Italian language. We’ve got an American translator – who I chose because he writes in a style that is very similar to mine – who translates my articles into English. Everybody is happy because I don’t have to translate anymore and the readers no longer have to digest my grammatical mistakes 🙂

Sborto is Spanish, and he only writes in Spanish language. Most of our writers are either American or English, and of course they write in English language.

Then we have six translators in order to translate all the articles into the different languages. It’s not so difficult: we coordinate the scheduling with a primitive system, basically a calendar on Google Docs with a different colour for each person. I chose red for myself!

Either I or Sborto review articles in all languages before publication in order to make sure that nothing is being ‘lost in translation’.

That’s a very common question on SDC! I always start by explaining that, although there is a central government, the same currency and the same written language (spoken language may vary quite a bit, just ask Cantonese people!), China is as big and as diverse as Europe.

If you want to have a ‘cultural’ trip stay in Beijing, then go to Pingyao, Datong, Xi’an and/or Henan Province.

If you want to see ‘wild nature’, then head straight to Tibet or Xinjiang.

If you are interested in understanding how fast China is catching up with the US and EU, then perhaps go to Shanghai and Shenzhen.

If you want to go to beach, then do yourself a favour: go to Thailand or Philippines!

Personally, the first time I went to China, in 2008, I only had 8 days and I decided to spend them all between Beijing and the nearby Great Wall. But I’m a slow traveller.

Oh, I have a ton of stories… what about the time my boss made me lose face if front of all the employees?

I’m deeply in love with Xinjiang food. But I can’t really pick a single dish.

Thank you to Furio for taking the time to catch up with us and for the brilliant answers to our question. We hope to hear more from him soon! Be sure to give SDC a follow socially and to check out their website – you won’t regret it!