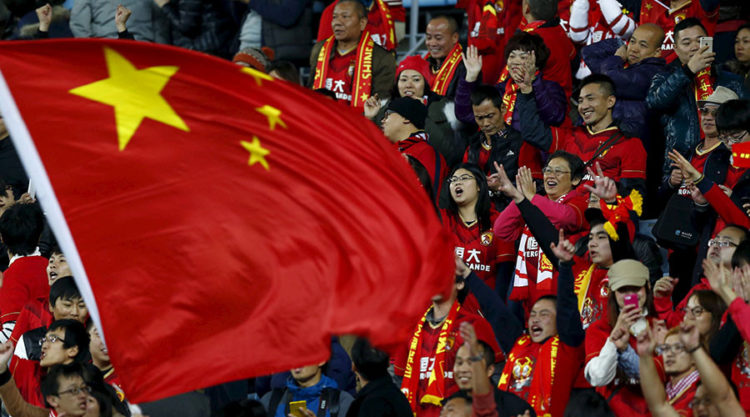 China failed to qualify for this year’s World Cup in Russia, but that doesn’t mean that the country doesn’t have a connection to the tournament. As China establishes itself as a football-loving nation, Chinese fans, China-based players and even Chinese chefs have been stamping their mark on the tournament!

Cray Think It’s All Over…

A train carrying 100,000 crayfish travelled from the central Chinese city of Wuhan and reached Moscow just in time for kick-off. The crayfish journeyed in temperatures of below minus 18 degrees Celsius as they made the 17-day journey by train to ensure they stayed fresh for the tournament. The traditional method of preparing the crayfish in China – which involves various spices – has been swapped for cream, cheese, and garlic, to appeal to the European palate.

The crayfish made their way to bars and restaurants across the country, where it is hoped that they will become a firm match-day favourite, just as they have in China with millennial spectators.

With the world cup now well underway, smiling fans are a main-stay on front pages across the world. Unsurprisingly, Russia tops the list of fans registered to visit the tournament (800,000), however up to 60,000 Chinese fans are also expected to be present at this year’s event. England fans snapped up just 31,000 tickets ahead of this years tournament, following the various security warnings spread through the media.

Chinese fans often adopt a national team other than their own. Germany was a firm favourite at the 2014 World Cup, alongside Brazil.

Seven Nations Have Players from the Chinese Super League – Could One of Them Win the World Cup?

There are nine players who currently play for Chinese Super League sides representing their country at this year’s World Cup. Portugal’s Jose Fonte (Dalian Yifang), Argentina’s Javier Mascherano (Hebei China Fortune) and tournament favourites Brazil’s Renato Augusto (Beijing Guoan) are among those with the most hope of lifting the coveted trophy!

How are your country getting on at this year’s tournament? We’d love to hear from you on our social media channels about their progress in Chinese or English!

Did you know that Xi Jinping has set China a goal of winning the World Cup by 2050?